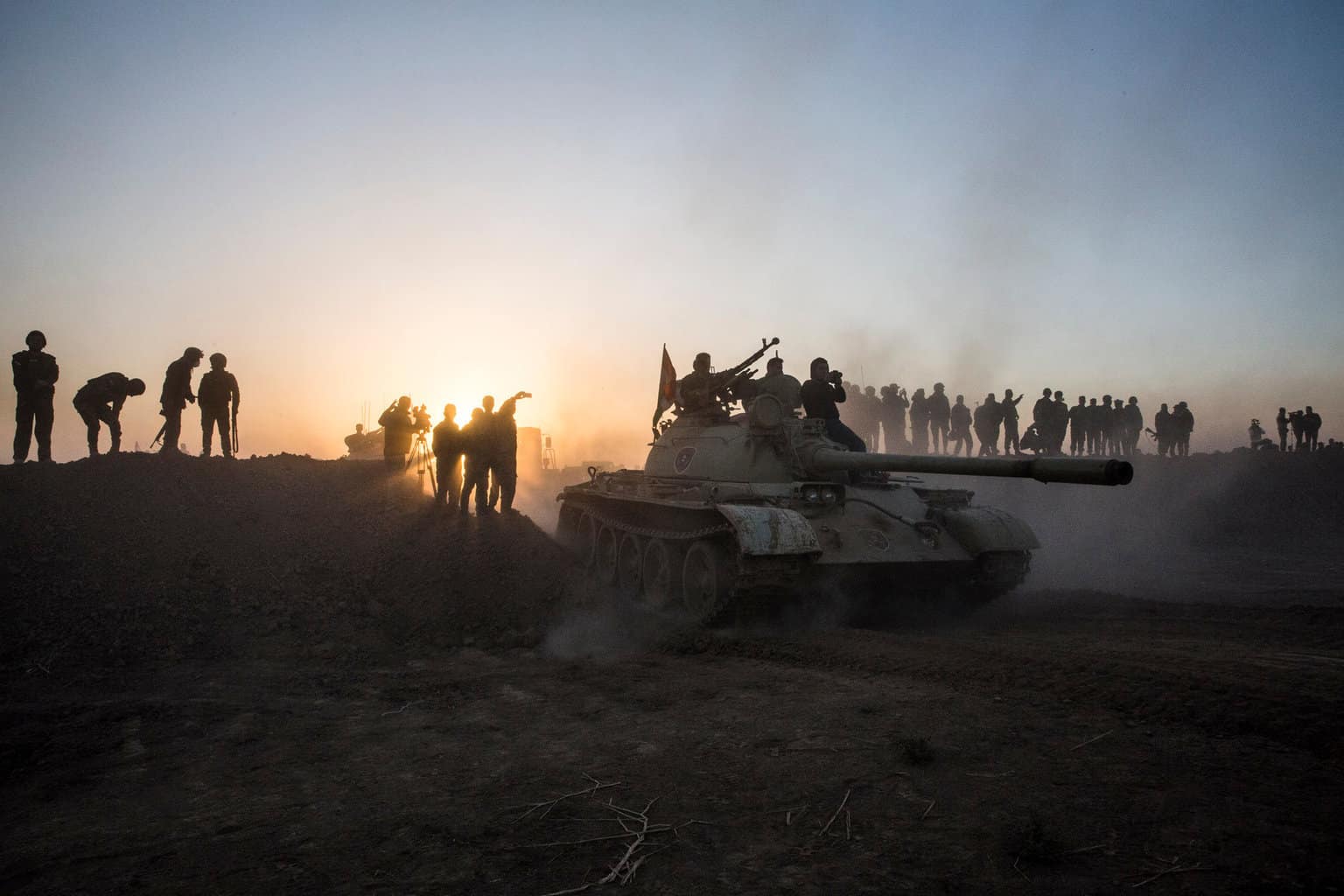 Jeremy Courtney and his wife, Jessica, live in war-torn Iraq with their two children where they serve families through their nonprofit Preemptive Love. The below is excerpted from Jeremy’s new book, Love Anyway, which details the terror, heartbreak and ever-present joy of the Courtneys’ journey from Texan suburbanites to Middle East humanitarians in pursuit of The More Beautiful World.

“Jeremy, our sources say they’re holding the men without charge, in inhumane conditions.”

Hala, a brilliant Iraqi, a Fulbright scholar, and one of our dearest friends, was simply explaining the security process. She wasn’t making any recommendations; she just recognized that I didn’t understand the military protocols for clearing civilians from the battlefield.

The military drives ISIS out, rushes in to secure the population, and separates the men from their families. This leaves women alone in the desert, caring for kids by themselves, completely afraid that their husbands, sons, and fathers are being tortured, or worse.

They are often right.

“Is that why that woman just sat in the dirt beside the canvas and the tent poles?” I asked. “Because all the men are detained and she’s responsible for taking care of herself?” I asked. “I’m not a human rights expert, but holding them without charge and not feeding them sounds illegal. Can we get in to help them?”

“What do you mean?” she asked, her tone somewhere between intrigued and incredulous.

“Like, could we give them food or clothes or whatever they need?” I said.

“The prisoners, you mean? They are suspected of being ISIS members, you know? Some of them are ISIS members,” she insisted, certain I must have misunderstood the situation.

“Yeah, but word is going to spread. If the military is holding them illegally and not feeding them, all the men who are left around Fallujah and upstream into Mosul are going to become more and more terrified that this war against ISIS is actually about sectarian revenge against Sunnis, and then even the innocent ones are going to be afraid to come out to us and cooperate.”

It was a scenario we’d seen play out on numerous occasions.

“Their resistance will stiffen, they’ll be further manipulated by ISIS, and the humanitarian costs will increase as more women and children are left on their own to deal with the aftermath of these battles.” I paused, hoping she wasn’t mad at what I was suggesting.

“I’m just saying, we could feed them—it doesn’t matter if they are ISIS or not—they need to eat, right?”

“I’m sorry, I’m just surprised,” she said finally. “Most aid workers don’t talk like this. They are sometimes too afraid to do the right thing because of what their donors might think.”

It was 120 degrees in the Fallujah desert, and the courtyard smelled. Six hundred men were still clad in the same clothes they’d been wearing when they were first rounded up by security forces a month ago. Some claimed to have no idea why they were still being detained.

When Sadiq and the team entered the prison compound with food and clothes for hundreds of detainees, he was completely unprepared for what he saw. Or, more accurately, for whom he saw.

The man’s hands were tied behind his back. He was blindfolded, on his knees, facing the wall, and wearing a yellow jumpsuit. But Sadiq recognized him immediately as a notorious tribal sheikh.

Sadiq knew why the sheik was being held. Sadiq had seen the video. And all the memories came rushing back to him.

Sadiq was outraged. This is the guy who’d given the command to kill his friend. Right after they executed Sameer, the captured soldier, they broadcast the video to further drive a wedge between the people and the government they had vowed to overthrow. Sameer’s executioner was hooded, dressed in black from head to toe. He marched Sameer in front of at least 30 Sunni tribal sheikhs, all standing in their finest robes, reading out a statement of loyalty to ISIS. Sameer’s hands were tied behind his back, and he was still wearing his Iraqi military fatigues from the day he was captured, as the executioner forced him to his knees. Sameer looked longingly to the heavens, no doubt praying for God or even a missile strike to save him from this fate. Then ISIS beheaded him.

In addition to Sameer’s death, the call to arms resulted in additional attacks, including one that killed 15 volunteer reservists from Sadiq’s hometown. One of the guys had taken Sadiq’s shift the night before and gone to the frontlines in Sadiq’s place.

As Sadiq cut a line toward the sheikh, the phrase rang in his mind as he tried to find the words. His mouth was pasty. The heat was oppressive, but he burned even more from within. One of our guys handed him a bottle of water.

“You killed my friend,” he said as he approached the sheikh, who sat helplessly, his hands still tied behind his back.

If Sadiq had punched the old man in his gaunt, gray-bearded face, the soldiers in the compound likely would have cheered.

“You killed my friend,” Sadiq repeated, twisting the water bottle in his hand.

The sheikh lifted his gaze slightly from the ground. The other tribal leaders imprisoned beside him in their yellow jumpers turned in shock at the personal nature of Sadiq’s accusation.

“You killed my friend,” Sadiq continued, “But I’ve come here to feed you and give you a drink.”

The sheikh drank instinctively. It was a merciful relief from the searing heat.

“Why did you give me water?” the old sheikh said.

“Because my Islam is different than yours,” Sadiq replied. “I believe we must forgive our enemies—even those who murder our friends and dear ones.”

The old sheikh started to cry.

And with that move, right there in the middle of the Anbar desert, Sadiq smuggled us out of The Way Things Are and proved we weren’t crazy. We weren’t making this stuff up. It wasn’t pie-in-the-sky naiveté. We could experience the worst of humanity and still love anyway.

We’d entered the outer edges of The More Beautiful World.

For over a decade, Jeremy Courtney, and his wife, Jessica, have served families who’ve been terrorized by war in Iraq and Syria through their nonprofit Preemptive Love. A sought-after speaker, Jeremy’s work has been regularly covered by NBC, CBS, CNN, BBC, USA Today, The New York Times and others. His new book, Love Anyway, releases September 24.

Jeremy Courtney and his wife, Jessica, live in war-torn Iraq with their two children where they serve families through their nonprofit Preemptive Love. He is the author of the new book "Love Anyway", which details the terror, heartbreak and ever-present joy of the Courtneys’ journey from Texan suburbanites to Middle East humanitarians in pursuit of The More Beautiful World.

‘Jurassic World 3’ Will Get the Whole Gang Back Together