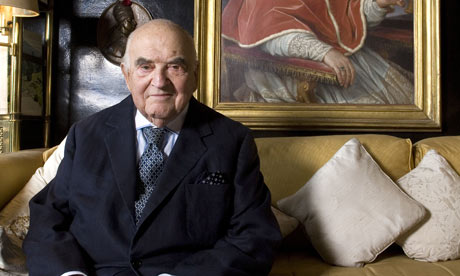 George Weidenfeld escaped Nazi-occupied Austria in 1938, with help from Christian groups that also gave him and others clothes and food and helped them to Britain. Now 95 years old, Weidenfeld has amassed a fortune through a publishing business. He became a British citizen less than a decade after his arrival, and was later knighted and appointed the title of Lord. He never forgot what those Christians did for him. And he’s returning the favor.

Weidenfeld is establishing a fund to sponsor Christian refugees in Syria and Iraq who are fleeing ISIS. “I had a debt to repay,” he told The Times. “It applies to so many young people who were on the Kindertransports. It was Quakers and other Christian denominations who brought those children to England. It was very high-minded operation, and we Jews should also be thankful and do something for the endangered Christians.” Last week, the fund provided a privately chartered plane that flew 150 Syrian Christians to Poland. The fund aims to offer 12-18 months of support for around 2,000 refugees. The project has been criticized for only supporting Christians, leaving out Muslims whose lives are also threatened by ISIS. But Weidenfeld simply said he’s doing what he can. “I can’t save the world,” he said. “But there is a very specific possibility on the Christian side.”