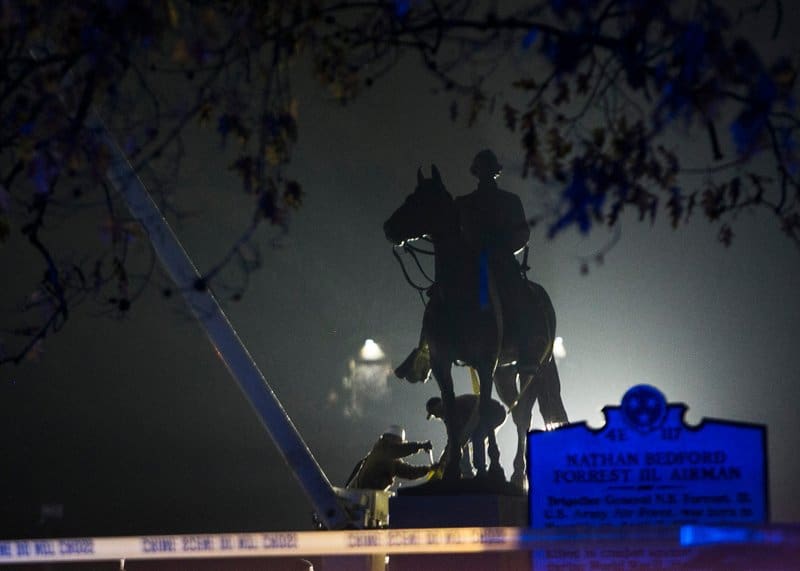 The Tennessee House of Representatives voted Tuesday to fine the city of Memphis $250,000 for removing Confederate monuments. The city was going to use the money for a bicentennial celebration next year.

The fine manifested as an amendment to a House appropriations bill. It sparked heated debate and vitriolic rebukes among the Congressmen. Rep. Antonio Parkinson began to call the amendment “vile” and “racist” before he was cut off from boos by his peers, according to the Associated Press. The Tennessee House is Republican-dominated.

Last year, Memphis found a legal loophole that enabled them to remove two Confederate statues and a Confederate bust by selling the parks that housed the statues to a nonprofit. That organization removed the statues, one of Confederate President Jefferson David and another of Confederate general and Ku Klux Klan leader Nathan Bedford Forrest, under the cover of darkness.

Parkinson, who is African-American, said his fellow lawmakers revered Forrest “as if he was a god. You remove money from a city because we removed your god from our grounds.” Memphis is majority black.

Representative Gerald McCormick, a Republican from Chattanooga, said this decision was obeying the spirit of the law, which implies the city should preserve its historical monuments.

“The law was very clear,” McCormick said. “They got smart lawyers to figure out how to wiggle around the law, and I think that’s what the issue is.”

Another Republican lawmaker compared the statue removal to acts of ISIS, saying both groups are trying to erase history. Rep. Andy Holt said of the punishment, “Today is a demonstration that bad actions have bad consequences, and my only regret about this is it’s not in the tune of millions of dollars.”

Trump Tweets Support for Imprisoned Pastor, Says He ‘Is on Trial and Being Persecuted in Turkey for No Reason’