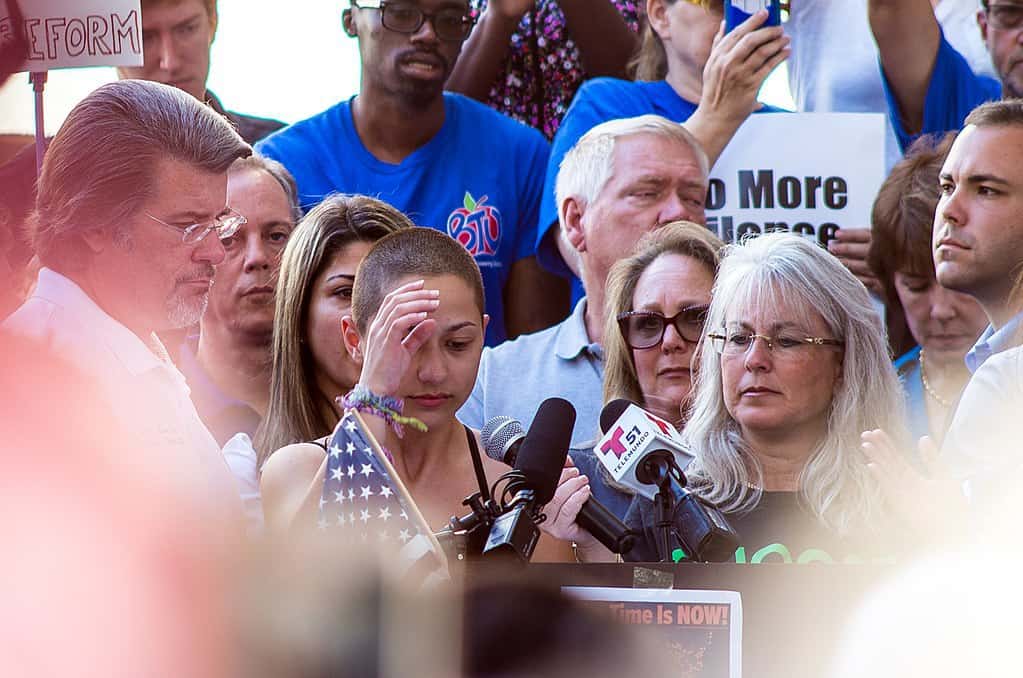 The buzzy, neverending hum of teenage energy can seem a bit unfocused at times. You can ask high school teachers or youth workers about this if you like, but you really need look no further than your own teen years, when your interests and attention seemed to spiral out in a million directions that could be mistaken for having no direction at all. This can of course lead to the vertigo of youth but, when focused, it can also change the world.

Four days after the shooting in Parkland that claimed seventeen lives, a small team of teenagers had focused their energy to a degree that should shame the “grownups.” Their movement had a short, compelling name (Never Again), concise goals (more background checks for gun buyers), plans for a nationwide protest, a slew of media appearances and a handful of memorably viral speeches that took their message across the nation. Emma González’s stirring, tearful “We call BS!” cry rallied a movement in a way politicians and adult pundits have failed to for nearly a decade.

In these divisive times, it was perhaps unavoidable that these teens — a growing collective, but mostly assembled behind González, David Hogg and Cameron Kasky — would meet resistance. A lot of the early talk about being sensitive to survivors dissipated once those survivors made it clear they had real demands.

Some of the pushback they received came from their targets. In the past, the NRA has proven adept at crafting a public narrative in which they are the underdogs, forever punching upward in their quest to defend the Second Amendment. But there is no heroic narrative when your opposition is a community of school shooting survivors. This led a collective of online conspiracy theorists to posit that these weren’t school shooting survivors at all, but rather “crisis actors” paid off by George Soros as part of some sort of elaborate plot to disarm America. These sorts of harebrained lies are a lot easier to engage in than real debate with the issues.

But other pushback came in the form of tut-tutting adults, who seemed to find the teens not wrong, exactly, but a bit unseemly. The word “teenager” has become a pejorative in America. While our culture idolizes a youthful aesthetic, it dismisses the adolescent intellect — forever comparing it unfavorably to some unspecified past era in which youth were more intelligent and better behaved.

Take Erick Erickson , who accuses Hogg of being a “high school bully” before determining that “what we are seeing is that no, high school kids are not people we should take seriously on any subject.” Or Dinesh D’Souza, who trumpeted “adults – 0, kids – 1” after a measure to ban assault rifles was defeated in Florida. Bill O’Reilly suggested that the teenagers were too fragile to be taken seriously.

When your ideological opponent is a teenager, he or she is easy to dismiss. “Teenager” is a handy, ready-made stereotype that you can cram anyone between the ages of 13 and 19 into in order to avoid having to really engage with what they’re saying. Why wrestle with the substance of their argument when it’s so much easier to just sigh about “kids these days” and be done with it?

Our country has a long history of this. In the 1960s, Bull Connor turned fire hoses on the youths of the “Children’s Crusade” who were marching for desegregated schools. In the 1970s, our country decided to write off hippies as glass-eyed stoners instead of listening to what they were saying about their friends fighting and dying in Vietnam. In the 80s and 90s, teenagers tried to wake the nation up to the scourge of school bullying, only to get tiresome lessons about “just ignoring them.” In more recent years, teenagers have taken the lead in Ferguson, New York City and Cleveland as the public face of Black Lives Matter, and were promptly dismissed as angry black youths. In all these issues, the teenagers ended up being on the right side of history.

Or go back further. Mary Shelley was 19 when she wrote Frankenstein. Joan of Arc was a teenager whose name became synonymous with challenging the powerful. Although the New Testament doesn’t state it outright, most scholars believe that most of Jesus’ 12 disciples were teenagers, just like Jesus’ mother was when she gave birth to him. And don’t forget history’s most famous little shepherd boy, who slew a giant and went on to rule a kingdom.

Assuredly, all of them dealt with criticism of their youth. We can even infer that Timothy, the Apostle Paul’s protege, was suffering some of these criticisms. “Let no one despise you for your youth,” Paul wrote to him in 1 Timothy 4:12, “but set the believers an example in speech, in conduct, in love, in faith, in purity.” Paul perceived that some people might hold Timothy’s youth against him, and told instructed him on how to handle such critiques: with substantive virtue.

There are, of course, plenty of real reasons one might disagree with the Parkland teenagers’ proposed policies. Their youth doesn’t shield them from critique. Even if you agree with their general call for increased background checks, you might find yourself taking issue with individual points or responses. They are human and they will make mistakes. There’s a ton of pressure on them right now to be knowledgeable, compassionate, witty and articulate. Very few people are cut out to be all of these things perfectly, even when they aren’t still processing horrific tragedy. Grace and correction will be required.

But there’s a difference between offering thoughtful critique and just waving away teenagers as immature idealists unworthy of consideration. It’s not just insulting and ahistorical, but it’s a discredit to the thoughtful, reasoned debate adults should be modeling for kids. Teenagers are going to change the world — if not today, then most certainly in the near future. The only question is how long it will take before the rest of the world takes them seriously.

Find Your Doom, Or Your Hope, In ‘Annihilation’

Wait. Is Mark Hamill Going to Be in the next Guardians of the Galaxy’ movie?