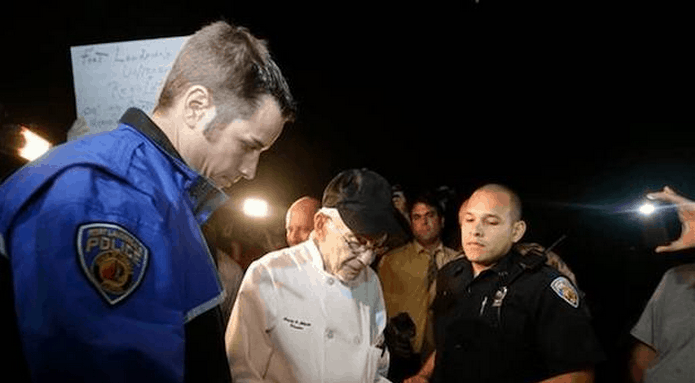 Earlier this week, we brought you the story of 90-year-old Arnold Abbott, a Fort Lauderdale resident who ought to be getting parades thrown in his honor. Instead, he’s getting busted—twice in one week now—for continuing to feed the homeless despite a new city ordinance that bans feeding the homeless without first getting a city permit and providing restrooms and hand-washing stations. You know, just normal city ordinances. Fort Lauderdale Mayor Jack Seiler addressed the new laws in a letter to the public, saying:

The ordinance does not prohibit feeding the homeless; it regulates the activity in order to ensure it is carried out in an appropriate, organized, clean and healthy manner. At a recent outdoor food distribution, citations were rightly issued for non-compliance with the process enacted to ensure public health and safety.

Abbott successfully sued the city for the right to feed the homeless back in 1999, but that was before the new ordinance, and now he’s facing a $500 fine and 60 days in jail. However, he remains undeterred. “I’m going to have to go to court again to sue the city of Fort Lauderdale, the beautiful city. These are the poorest of the poor. They have nothing. They don’t have a roof over their head. Who could turn them away?”