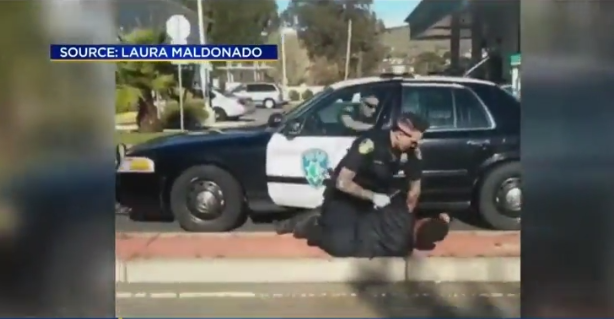 Vallejo Police Department’s chief announced that there will be an investigation after video surfaced of an officer punching a man who appears to be unarmed and defenseless and beating him repeatedly with a baton.

Chief Andrew Bidou released a statement calling for a “full and complete investigation” conducted by the Internal Affairs Division and other experts on the use of force.

“Upon completion, I will thoroughly review the entire investigation and personally make a final determination,” the chief said. “I ask for your continued patience as we proceed through this process.”

The incident happened on Friday afternoon and started at a gas station. Employees at the station called the police to report a man behaving erratically. When police arrived the man, Dejuan Hall, 23, ran and police chased him to a median in the roadway. As he tried to restrain him, he punched him in the face repeatedly and hit him with his baton on the forearm repeatedly.

He was eventually arrested for suspicion of being under the influence of a controlled substance, resisting arrest, resisting or threatening an officer and violating probation.

An expert on police procedures told the Los Angeles Times that in the investigation, the officer will have to be able to explain “why he had to use that level of force.”

“After one or two blows, the officer was clearly able to get control of the guy,” Alpert said.