If you’re on Twitter, first of all, sorry. Second of all, you may have noticed that on Monday, “Hookers for Jesus” was trending in the United States. If you’re smart, you probably decided to resist the urge to click on it, since something “trending” these days is rarely a good sign. And in this case, the reason for the trending is a weird one.

It has to do with the Department of Justice, believe it or not. The DOJ is taking heat following a whistleblower complaint which revealed that Hookers for Jesus received about half of a million-dollar grant earmarked for anti-human-trafficking operations. Outside contractors recommended two established, highly qualified anti-human trafficking organizations: Catholic Charities of the Diocese of Palm Beach and Chicanos Por La Causa of Phoenix.

But the DOJ opted to give the funds to Hookers for Jesus and another organization called the Lincoln Tubman Foundation. Both received much lower ratings by the outside contractors, who flagged them for several controversial practices and a lack of expertise.

Hookers for Jesus was founded in 2007 by Annie Lobert and operates Destiny House, which serves as a safe house for sex-trafficked women and sex workers who want to leave the industry. Destiny House bans “secular magazines with articles, pictures, etc. that portray worldly views/advice on living, sex, clothing, makeup tips.” Newsweek says the organization’s teachings on homosexuality may leave them open to federal anti-discrimination laws, and also called into question Hookers for Jesus’ experience with minors and male victims of human trafficking.

“This might be something that may be appropriate for our civil rights department to look at,” Head of the Office of Justice Programs Katharine Sullivan told Reuters. “Those are not facts or things that we would know ahead of time.”

The Lincoln Tubman Foundation received the other half of the grant, and has “little to no experience” in anti-human trafficking, according to the memos obtained by Reuters. The organization was founded in 2018 by Brooke Burris, who runs it out of her parents’ mansion.

Reuters notes that Catholic Charities of the Diocese of Palm Beach and Chicanos Por La Causa of Phoenix, the two organizations originally marked to receive the funds, have publicly opposed the Trump Administration’s harsh immigration’s policies.

Can Hope and Worry Coexist? 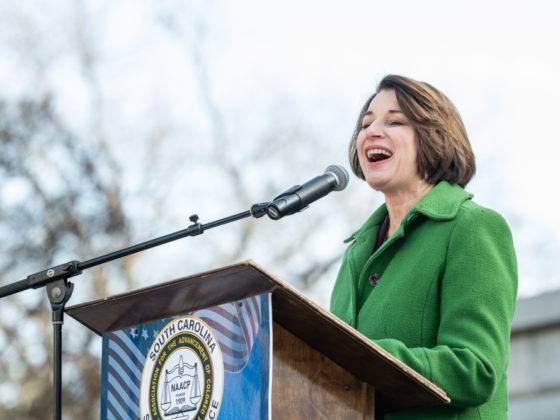 Klobuchar: Pro-Life Democrats ‘Are Part of Our Party’