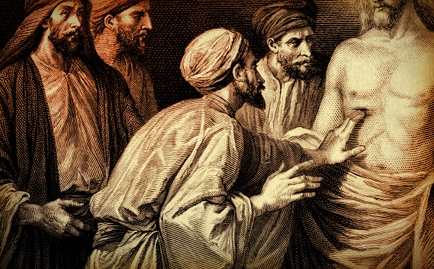 I grew up in suburban Chicago among the stray dogs of Evangelicalism. Since 1970, I’ve not attended a traditional Evangelical church, right up until I became a Vineyard pastor. Reading the Bible and walking with God involved daily exercises in doubt because my friends and I would read a passage and say, "Huh—I wonder what that means?" No one ever told me I had to swallow everything at once in order to be in the club. Doubt kept me from indigestion because I had to take things one bite at a time.

Still, the Scriptures have been my standard for living since the beginning of my walk with God, but one of the benefits of congregating with misfits was I never had to endure other people insisting what the Bible meant. My grasp of the Bible is like my marriage: I love my wife very much, but after 26 years together I still don’t pretend to understand her. That’s true in marriage, and it’s been true in my walk with God: clueless, committed and willing to live with occasional tension when my limited intellect bumps up against the most revered document in Western history. So perhaps it will come as no surprise that on the subject of doubt, I’ve found what I think is a biblical model for doubt.

It will score no points for originality, but in my model for doubt in the big leather book is that guy named Thomas. Since I never had a Sunday school teacher wiggle her finger in my face and warn me not to be like "Doubting Thomas," I just figured he was one of the gang, like Puddleglum in C.S. Lewis’ Narnia series: a real buzz-kill, but still part of the team.

Here are four things Thomas taught me about doubt:

Thomas put courage above faith: In the first half of Jesus’ ministry, the religious people had attempted to kill Jesus at least twice (Luke 4 and John 10). Then Jesus got word that His good friend Lazarus was sick, along with the request to go heal him. The only problem was Lazarus lived within sight of Jerusalem, and Jesus had already told His friends that Jerusalem meant death. While guys like Peter tried to say they would never allow that to happen to Jesus, Thomas simply said, "Let us also go, that we may die with Him." I want courage like that. Eeyore for grown-ups: ready to face death.

Thomas put honesty above faith: Thomas wasn’t there when the other guys on the team saw the resurrected Jesus. Yet when he heard them talk about this insane idea that Jesus was physically alive, he stood his ground: "Unless I see the nail marks in his hands and put my finger where the nails were, and put my hand into his side, I will not believe." I understand church-people use this as an example of what not to do, but I admire his honesty. We’ve all met people who lie about their faith just to go along with the crowd and end up with neither honesty nor faith.

Thomas put relationship above faith: Thomas didn’t separate himself from his friends because of their differences. And to their credit, the other guys didn’t kick him out. The standard church model runs like this: you have to believe in order to belong. The Gospel model says, you can belong before you believe. I’ve seen people on both sides of the divide walk away from relationships over disagreements about faith. Too bad—some of my best friends are pain-in-the-butt "unbelievers." But what can I do? They’re still my friends.

Thomas got the ultimate creepy experience: I think the resurrected Jesus creeped everyone out: Appearing. Disappearing. Cooking. Eating. Floating away. But one offer Jesus made only to Thomas: "Reach out your hand and put it into my side." That’s right, "stick your hand into a spear-sized hole in my ribs, all while I’m living, standing and talking to you." Thomas’ doubt didn’t offend the Lord. Jesus simply called his bluff and freaked him out. It’s true, Jesus said "stop doubting," but only after pushing all the chips to the center of the table. In a way, his doubt opened the door to a unique experience with Jesus.

Thomas teaches me that there are worse things to be called than "doubter." His interactions with Jesus also teach me that Jesus is secure enough in His identity to display grace and patience with people who don’t have it all worked out—which, it turns out, is everyone.

This article originally appeared on Jason Boyett’s blog. Ray Hollenbach is a pastor in Kentucky and a regular blogger.

The True Mission of a Leader