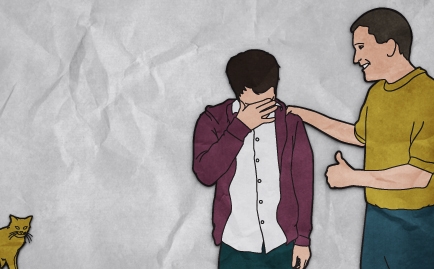 Though we Christians are often painted with a somber brush, the reality is that you can’t have a faith that encompasses both miming and hand bells without expecting some degree of mirth.

The subtle games we play to find out if you’re a Christian who drinks beer, too? Funny.

Not knowing whether you’re supposed to pray for people having plastic surgery? Funny.

Wishing people sitting near you knew you direct deposit your tithe and do not in fact hate “love offerings”? Funny.

There are millions of humorous things about church and faith and prayer. The funny thing is, when we’re honest about them, when we admit them and laugh and celebrate the quirkiness of our faith, something weird happens. By clearing the clutter away from Christianity with humor, we’re able to see the beauty of Christ.

It’s in that spirit I offer you these three glimpses into the Christian subculture.

Watching R-rated movies … but only if they’re violent

For Christians, it’s completely OK to watch R-rated movies, but only if they got that rating because of violence. If they’re rated R because someone is getting their head cut off or there’s a battle scene that’s so gory, blood splashes on the camera lens, don’t worry. God’s cool with that. However, if the movie is rated R because of sexuality … well, I hope you enjoy your fold-out couch bed in hell. It’s gonna be a hot one, my friend. A hot one, indeed.

I’m not sure where this rule came from, but it’s true. Not only do Christians watch violent R-rated movies, we’ll quote them from the pulpit, build sermon series around them—even show clips from them during service. I call it "The Braveheart Rule," and my theory is that it’s because of the Old Testament.

Have you ever read any of the Old Testament? It’s hardcore. Samson smashes people in the head with a donkey jawbone. A priest runs a spear through two people having sex. David carries Goliath’s head around like a bowling ball. It’s violent. I think Christians read that and assume: “Cool. God’s down with some wanton violence. R-rated movies, here we come!”

But if there’s any nudity, if a single nipple makes a cameo at any point, forget it. Throw that piece of nonsense in the trash. That is horrible. We’ll have to wait until they show the edited version on TBS.

Judging fundamentalists for being judgmental

You know what I don’t like about fundamentalist Christians? They’re so judgmental. I really don’t like when people do that. Don’t they know we’re supposed to be about love and not judgment? Jesus called us to love Him with all our heart and all our mind and all our soul. And to love others! Don’t they get that? It’s about love!

I’m just so sick of their negative attitudes.

They hate dancing, too. Did you know that? I’m not making that up or perpetuating a stereotype. They all hate dancing. They even made a documentary about it one time starring John Lithgow and Hollywood’s Kevin Bacon. Gripping stuff really, but I doubt any fundamentalists saw it because they hate popular culture. Ugh, I can barely stand how judgmental they are.

You know they don’t drink alcohol, right? Oh no, don’t ever offer them a glass of wine or a pint of beer. They’ll throw that right back in your face. That’s kind of a litmus test I use to determine whether you’re a fundamentalist or not. If I suggest we have a glass of red wine and you refuse, then I know. I know exactly what you’re all about and I can read the depths of your spiritual walk by that simple refusal. You’re a fundamentalist and you’re judgmental.

Sure, I don’t know many fundamentalists personally, because I can’t stand being around people who are judgmental, but I caught a few seconds of a church service on television once. I think it was a church in Texas. Most fundamentalists either live in Texas or are planning to move to Texas at some point in their lives. But even though I haven’t been to a fundamentalist church in, I don’t know, ever, you don’t need to go to one to know what they’re all about. Fire, brimstone and, above all, being judgmental.

Don’t you just hate how judgmental fundamentalists are?

I wish they were more open-minded.

Stop reading this right now if you want to ever peacefully sit through another prayer at the end of a sermon. Turn the page. Read a different article. Don’t walk away mad, just walk away. Because what I am going to tell you about closing prayers is about to ruin you.

I shouldn’t even be telling you this. Pastors the world over are going to hate me like that magician on Fox who exposed all their secrets. I can’t hold back though, I have to tell you the truth. Here goes:

The closing prayer at church is usually tactical, not spiritual.

That last bit of holiness they slap on to a sermon? It’s a bridge prayer. Those three or 30 sentences that feel spontaneous? They’re scripted. That final oomph of prayer that ushers in a final song? It’s a transition tactic.

Ask any minister who’s ever had a sermon followed by a song and they’ll tell you, it takes 48 seconds to get a piano onto stage. Pray too short and the lights come up with the mysterious black-clad helpers stuck on stage like evil oompa loompas. Pray too long and the musicians get antsy or a live feed to another campus gets bungled.

But not every church does this. Sometimes the final prayer is just that: a simple bowtie of a prayer. The end. Go home. So how do you tell when you’re experiencing a tactical prayer? Look for these three signs:

Questions. If the prayer sounds like an interview, watch out, that’s a tactical prayer.

Questions like: “Where could we go where you don’t see us? Who could stand against you in all your might? In a round of Frisbee golf between Samson and Moses, who would win?” OK, you probably won’t hear that last one, but if you ever hear a string of sentences that kind of sounds like a clown pulling colored ribbon out of his mouth, that’s a tactical prayer.

Head turn. You shouldn’t open your eyes during a prayer. Every time you do, an angel loses its wings. But if you happen to find yourself with open eyes in the middle of a prayer, take a look at the pastor. If he cranes his head at the oncoming musicians. It’s tactical. If he gives them some sort of secret hand signal from the movie Sniper starring Tom Berenger and the drummer does some sort of Navy Seals jump move to get over that plastic fish bowl they put around him, you’ve got a tactical prayer.

I’m sorry. I’m sorry that next time a pastor says, “Let’s close in prayer,” you’ll be counting the questions. I didn’t want to tell you about this secret, but when I preached at a church and the worship leader told me he needed 90 seconds of prayer, I knew I had to. I hope you can forgive me.

Jonathan Acuff is the author of Stuff Christians Like. This article is excerpt from a longer piece in the current issue of RELEVANT.

Cheesiness Is a Sin

Getting the Full Picture of the Oil Spill