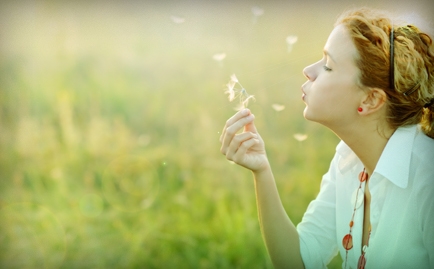 We think of luck as simply a positive reversal of fortune or chance occurrence that worked out in our favor. Like winning the lottery. Jesus sees it as far more. He knows it takes more than changing your conditions and surroundings to make you lucky. It takes more than money or comfort or success. It takes the arrival of the Kingdom of God. And that is no chance occurrence.

Think back to Jesus’ famous Sermon on the Mount. When Jesus raised His eyes to address the crowd that had gathered that day, He must have seen some interesting people. These were not the important big-city types. Those would come later when Paul joined the team and traveled to various cities. No, these first followers were country folks. Simple, well-meaning, kindhearted peasants. Luke, the gospel writer, doesn’t mention a name we might know or even a grouping—like Pharisee or Sadducee or scribe or lawyer—we might recognize other than “the disciples.” This is simply a crowd. A crowd of ordinary, unspectacular people. Sure, the 12 He had chosen were there, but they may not have looked like the most promising bunch either.

So when Jesus began to speak, it’s important to remember who He was looking at. He wasn’t sermonizing, delivering a prepared oratory masterpiece to a mass generic audience. It wasn’t a canned speech He had taken on the circuit. Jesus, full of compassion, sat on the plain and spoke. To them. To the unlucky, to the outcast and insignificant, to the overlooked and undervalued.

And He began with this word: “Blessed.”

Except it wasn’t quite that word.

Both Luke and Matthew chose the Greek word makarios to capture our Lord’s opening word in the Beatitudes. Makarios simply means “fortunate, happy.” In secular Greek literature, it is used to describe the blissful state of the gods. It is not an inherently religious word. The Greek word more like our words “blessed” or “blessing” is eulogia. Eulogia is often used to invite or invoke God’s blessing and also to bless God. That word was, of course, available to Jesus—and Luke and Matthew. But He—they—chose makarios instead.

If we were to use a word today for makarios, we would choose the word "lucky." Not lucky as in the result of randomness. Not lucky as in the reward for properly acknowledging a superstition or a charm. It is neither the product of erratic chance, nor the result of currying favor with some capricious god. It is simply "lucky" as we use it conversationally: "You lucky dog, you get to take a vacation next week!" Or: "Lucky you! You just got a promotion in the middle of a recession!" Makarios, as one New Testament commentator suggested, is akin to the Aussie slang, “Good on ya, mate,” which is rather like the American, “Good for you!” Which are both like saying, “Lucky you!”

The irony of this word choice is heightened when we imagine Jesus looking at these ordinary, unspectacular people and exclaiming, “Lucky you!” He might as well have said, “Lucky are the unlucky!”

Lucky are you who are poor,

for yours is the kingdom of God.

Lucky are you who hunger now,

for you will be satisfied.

Lucky are you who weep now,

for you will laugh.

Lucky are you when men hate you,

when they exclude you and insult you

and reject your name as evil, because of the Son of Man.

Why would Jesus say that? Why would He call these unlikely and unlucky people, lucky?

If Jesus were sitting across the table from you and said to you that you are blessed, that He counts you as lucky, what would you think?

That’s crazy. No, I’m not, you would insist. I’m ordinary, unspectacular. And besides, I’m too messed up; I’ve made too many mistakes. I’m the person on the fringes, the margins, the outskirts. I’m not admired or applauded, respected or rewarded. I’m just … me. And whatever that is, it’s not lucky.

Or you would be tempted to think—as so many TV preachers do—that what this means is that everything you touch will turn to gold. You are blessed, and from here on out, everything is going to work out right. You’ll never get sick, never be broke, never be troubled again. You’ll live a charmed life. Things are going to get better and better until you fly away to glory. That’s what it means to be lucky.

Both responses would be wrong.

Jesus took an inherently nonreligious word, a word from normal everyday conversations, and filled it with divine implications. It turns out the ones we ought to call lucky are the ones God is blessing with the arrival of His kingdom. In doing this, Jesus redefined who the lucky ones are. They are not the ones culture lauds as successful, not the ones we secretly aspire to be. He turned our appraisal of the good life on its head. There is a great reversal coming; indeed it has already begun. And the ones who are receiving and participating in the kingdom of God are the ones who are truly lucky, deeply blessed.

Just like the people Jesus addressed, you are called lucky not because of your poverty or your hunger or your mourning or the persecution you’re enduring. You are lucky because in spite of it, you have been invited into the kingdom. It may not mean that your circumstances will immediately change. Many who heard Jesus’ words didn’t go off and all of a sudden “discover their purpose” and become influential world changers. Many, if not most, of them kept farming. And fishing. And raising their kids and going about their lives.

And yet everything had changed. They had seen a glimpse of God at work. Their hope was now rooted in the belief that Messiah had come. All that was wrong was beginning to be undone.

So it is for you. God has come to you in the midst of your mess and mistakes. He is announcing His arrival into your ordinary unspectacular life and inviting you to follow, to surrender, to live in a different way. God is rescuing and redeeming the world, and you—unlikely you!—have somehow gotten in on it. The trajectory of your life has been altered. You now have a part in the future that God is bringing. Like Abraham, you have been blessed to carry blessing, to live as a luck-bearer to the unlikely and the unlucky. You are receiving and participating in the kingdom of God.

And for that you are lucky. So lucky!

Adapted from Lucky By Glenn Packiam. Copyright 2011 Cook Communications Ministries. Used with permission. May not be further reproduced. All rights reserved.

Is Feminism a Dirty Word?

Syria Cracks Down on Protesters’ Homes