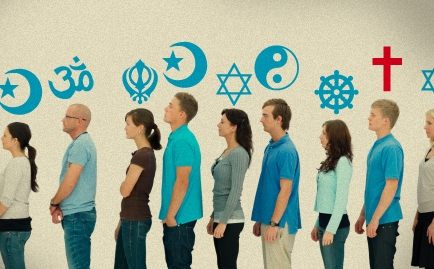 In 2002, Bishop Carlton Pearson was the epitome of success in the Christian world. His South Tulsa megachurch, Higher Dimensions Family Church, boasted more than 6,000 members, he served on the board of trustees at Oral Roberts University, he was a guest host on the Trinity Broadcast Network and he was one of a few black religious leaders advising President Bush. That was before he discovered “the Gospel of Inclusion.”

Pearson began preaching that Christ’s death provided salvation for everyone and that no one will spend eternity tormented in hell. While this message may sound sweet to some, his church family was not so accepting. Over the last few years, his congregation has diminished to a few hundred faithful, his church buses have been banned from the ORU campus and his church property has been lost to foreclosure.

Bishop Pearson is not alone. A recent Pew Study, for example, found that “70 percent of Americans with a religious affiliation say that many religions—not just their own—can lead to eternal life.” And in a more specific study, LifeWay Research asked a niche of Protestant churchgoers whether they believed a person could obtain eternal life through “religions other than Christianity.” Shockingly, 31 percent of respondents still agreed.

Universalism, or the belief that everyone will eventually be reconciled to God, is neither new nor novel. Early church fathers like Origen and Clement of Alexandria held to universal salvation, although it was later deemed heresy at the fifth ecumenical council in 553 AD. In America, founding fathers like Benjamin Rush also held to this view, and did so without apology. Rush once said, “A belief in God’s universal love to all his creatures, and that he will finally restore all of them that are miserable to happiness, is a polar truth.” Today, you might find the theological descendants of Origen and Rush in a Universalist Church.

“True Christianity is not so much about doctrines that we believe in. It is about following the way of Jesus,” says Eric Stetson, Executive Director of the Christian Universalist Association (CUA) and author of Christian Universalism: God’s Good News for All People. “A Buddhist, Hindu or Muslim may not see Christ the same way, but if they live in a way that reflects Christ—even if they don’t know Him—it will affect their eternal fate.” These people may be called ‘anonymous Christians.’”

Hell is, surprisingly, a real place in Stetson’s view, although he nervously avoids using that word. “We believe there is an afterlife, and we do believe there is a reality of judgment of punishment for sin because we reap what we sow. But ultimately, every person will come into harmony with God at some point,” he says. “God’s anger doesn’t last forever. It is His mercy that endures forever.”

Stetson is an ordained Charismatic minister, and on his board of directors sit people from various denominations, including the United Church of Christ, Southern Baptist Convention and several charismatic traditions. More than a third of the members of his association are ordained ministers and local church leaders. They have come together to unite around one thing: “the universal salvation of all people and the all-inclusive love of God.”

The One and Only

Clearly, there is a mammoth difference between Christianity as Scripture describes and the Christian Universalist’s variation. And it is not simply a matter of preference; it is a matter of Scripture. “Anyone who affirms universalism has a problem with biblical authority and ultimately with Jesus, Peter and Paul,” says Daniel Akin, President of Southeastern Seminary and author of A Theology for the Church. “The Bible provides no theological support apart from special revelation, and nothing that would support the anonymous and eventual views. That is more the wistful musings of liberal theologians.”
Darrel Bock, New Testament scholar and author of Dethroning Jesus: Exposing Popular Culture’s Quest to Unseat the Biblical Christ, agrees with Akin that Universalism fails to understand the core message of the scriptures. “If a person says they embrace Jesus and the revelation from God about Him in the Bible, which is our only real access to what He taught, then to believe everyone is saved denies fundamental parts of Jesus’ message and warning,” he says.

Furthermore, Universalism is irreconcilable with many critical scriptural lynchpins. For example, if God will eventually save all, the New Testament’s emphasis on evangelism is confusing at best. More importantly, if Jesus’ life was simply a wonderful example of how we must live, the cross becomes unnecessary. “To believe everyone is saved denies fundamental parts of Jesus’ message and warning,” Bock says. “In many ways, it risks making the cross very irrelevant, as well as the message Jesus taught and commissioned the apostles to preach and write about to the world.”

And what of the doctrines of judgment and grace? According to Philip Gulley, author of If Grace Is True: Why God Will Save Every Person, the difference between universalism and Orthodoxy on these issues is not much. “I suspect the chief difference between my understanding of grace and the Orthodox understanding is one of degree,” he says. “I believe grace will ultimately triumph, working for the eternal good in all lives, while Orthodox theology believes that there are limits and boundaries in God’s love for us.”

But in reality, the chasm between Universalism and Christianity on judgment and grace is not one of degree but  of definition. “What is amazing about grace is that it completely removes the huge debt of sin we rack up before God and transforms us into a new way of life where we can be what God created us to be, not simply go on as we were,” Bock says. “A savior who confronts me about the realities about myself and my utter need for God does me a favor. And I can love Him with all my heart because He has literally given me a new lease on life.”

Indeed, one must make several scriptural leapfrogs in order to arrive at Universal salvation. First, there is Jesus’ assertion that “I am the way, the truth and the life. No one comes to the father except through me” (John 14:6, TNIV, emphasis added). Then, there was Paul’s statement that “Salvation is found in no one else, for there is no other name under heaven given to men by which we must be saved” (Acts 4:12). And 1 Timothy 2:5 says, “For there is one God and one mediator between God and men, the man Christ.” The list rolls on and on in support of one central truth: Salvation is attained only through faith in Jesus Christ.

In the worlds of fashion, dance clubs and vacation destinations, exclusive is an attractive term. It invokes a sense of glamour and poshness. It makes one think of VIP rooms and all-you-can-eat buffets and clothes no one else has. But when it comes to salvation by faith, exclusive isn’t so pleasant.

Exclusive in this sense means that no matter how hard someone tries, they will never secure salvation without submitting to Christ. It says that the world’s most murderous dictator can make it to heaven through a deathbed conversion, but the Dali Lama still needs Jesus Christ. This type of exclusivity means that your best friend who is a Buddhist and your atheist co-worker may be in serious trouble, and no matter how good your father was up until he died, he didn’t go to heaven if he didn’t accept Christ. As sour as it may taste, that is the belief that is overwhelmingly supported by the scriptures and has been historically held by Orthodox Christianity.

The Christian message, therefore, can be a tough message to swallow in a world where inclusivity is king. We live in a culture where Little League baseball associations mandate that every child gets equal playing time and every opinion is considered equally valid.  Salvation through Christ alone “is not a popular message in our pluralistic world,” Bock says. “It sounds arrogant, but it is like saying to someone if you jump off a building on your own strength gravity will get you and you will die. You can’t fly on your own, even though you can picture that possibility in your mind.”

Followers of Christ must come to realize that our message can unite in supernatural ways, but it can also be terribly divisive. If this doesn’t sound right, check out Jesus’ words in Luke 12:49–57 when He says He didn’t come to bring peace and warns that Christianity would cause division even within families. “Jesus told us that Christian truth would be divisive,” says David Wells, author of Above All Earthly Powers: Christ in a Postmodern World. “He said it will divide families, and that is what has always happened. When people hold up as the norm that something cannot be true if it divides, it tells us how far they are drifting from a biblical understanding.“

By its very definition, “salvation” assumes that one is being saved from something. Though it can be unpopular in our culture, the message that salvation is found exclusively through faith in Christ is the only one that Scripture supports. But this message is not one of judgment and doom. It is one of humble hope.

“We should be as committed as Christians to making such efforts in our presentation of Jesus’ message—the difficult bits as well as the nice parts—because that is offering genuine help to those in dire need, a need every human shares,” Bock says. “If we were more humble about our dire need for God, we just might cling to Him more tightly.” Now that’s a salvation worth having.

This article originally appeared in the Nov/Dec 2008 issue of RELEVANT.