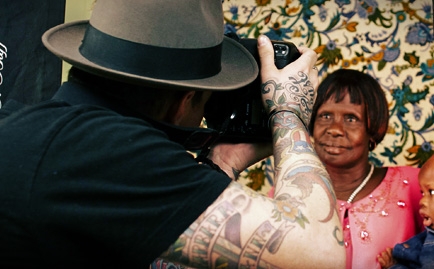 "Can I take your picture?"

This seemingly innocuous question is being flipped by Help-Portrait; they ask “Can we give you a picture?” In the process, recipients receive something more than a picture: hope. The idea is to offer free professional portraits for those who normally cannot afford them. It might be simple but the argument that celebrity photographer and founder Jeremy Cowart makes is unique; a portrait can make a difference, can change a life.

Through Help-Portrait, he hopes to start not just another non-profit, but a grassroots movement where everyday photographers can turn their passion into purpose. By building a community that can run with the mission, Help-Portrait becomes something closer to a label than a non-profit. And it is not just for the photographers; there is a need for assistants, makeup artists, people to coordinate and people to bring food and frames. All the work they put in doesn’t benefit them in any way. The photos are not for portfolios or personal benefit; the point is simply to give.

With their inaugural event on December 12 (tomorrow), communities across the nation and world are banding together to take portraits of those who typically can’t afford them, free of charge. RELEVANT caught up with Cowart and events coordinator Annie Downs to ask them about the idea and whether or not a photograph can actually make a difference.

What inspired you with the idea for Help-Portrait?

Jeremy: It was the perfect storm of factors. We have a terrible economy where people are hurting more than ever and in need more than ever. There is also have the rise of photography, with the advent of digital photography; everyone has a camera and calls themselves a photographer. And with the rise of social media, people are easier to reach—and I think our generation in general wants to be involved in something bigger. I was also really inspired by Advent Conspiracy and the campaign they run suggesting people do something other than spend money for Christmas.

Why do you think people have responded so well to this?

Jeremy: Photographers are generally very passionate people. They are always looking for a reason to use their camera to shoot, so when something comes along that gives them an excuse to celebrate Christmas, to fulfill a need, to use their camera, to connect and build relationship, it is kind of a no-brainer.

But why portraits? Can photography actually make a difference in someone’s life?

Jeremy: We are showing them that they are special and beautiful, even if no one has shown them that in the past. We are trying to serve them and love them. [When] we’ve done portraits [in the past], the women literally break down in tears because people have never given them that treatment before. We take cameras for granted, that they are always around and we can always have our pictures taken, but that is not the case for millions of people. Each story is so different; all we know is that when people leave, it is a night and day difference.

Annie: The real goal of H-P is to give people a chance to be the center of attention. Those moments when those people are in front of the camera, they are absolutely carefree. It doesn’t matter what they owe the credit card company, or who’s sick, or whether they are losing their home. All that matters for those 30 seconds is looking really good. I love that! I love that we can give them hope. Poverty steals a lot of things, like your home and car and food, but it also steals something on the inside. Help-Portrait doesn’t feed people or give them clothes, but it does feed that something on the inside. It shows them that they can say “I’m still worth being the center of attention, I still have value.” As a Christian, that is important to me that people feel worth, because that is what Jesus did. I couldn’t resist being a part of something that looks so much like what Jesus did.

But how do you respond to the person who says, “Yes, but they walk out the door and they are still hungry, homeless and don’t have enough clothes.”

Annie: That is why we encourage our photographers to partner with non-profit organizations, because it would be great to meet those needs at the same time. For the cynical people, it is one of those things that I would say, “You’re right, it is just 30 minutes of their life and something they can hold on to.” But if that one 30 minute session and that one picture makes them make one different choice that leads them back towards a healthy life, away from poverty, that one session was worth that one choice.

You did a dry run in Nashville. What were some of the reactions of those being photographed?

Jeremy: One man danced in front of the camera because he is 53-years-old and it was his first photo taken, ever. I also had a woman grab my arm and wouldn’t let go of me. It was the first photo taken of her in eight years, since she lost 300 pounds. I think she had wanted to see that for all that time and we had the chance to show her that. Another woman told me, “No one has ever made me feel special before.” It just blows me away, seeing how people respond.

How does it impact you as a photographer?

Jeremy: I am just reminded how good God is. This idea came to me last year and it is the loudest and clearest I have ever felt God speak to me. To see the other side of this idea unfolding is just seeing God’s goodness. I am humbled.

Jeremy: There is a night and day difference. Shooting people with Help-Portrait, it feels like a gift. It is special and we are documenting a moment in time, whereas shooting celebrities is just a pain in the butt. It’s just another thing in their day and they are rarely excited about it.

Interacting with people all over the country, what are encouraging stories?

Annie: I got an email yesterday from a photographer who said “I wanted to thank you because not only are you giving me this opportunity, but I have also met 20 other photographers in my city who are like-minded.” It is almost like before the event happens, a community is being built around photographers who like to give to people. There are 7,000, in 644 groups around the world who have signed on our community site. We had no idea that it would take off like this.

For more information about Help-Portrait, check out their website.

Have Yourself a Guilty Little Christmas