I’ll never forget feeling the tension in the classroom as he went into detail about the real meaning of the poem. “His body is polished ivory,” says the ESV, but according to Tremper, the Hebrew word for body refers to the man’s midsection and the image of ivory is intended to invoke the original form of ivory: an elephant’s tusk. Yes, that’s right. The wife in Song of Songs 5:14 is admiring her well-hung husband.

The reaction among the students was classic. Blushes, giggles, eye-brows raised to the ceiling. Apparently their Sunday school teachers never explained the connection between ivory tusks and penises. My own palms started to sweat as I thought about the slew of phone calls I was bound to get from angry parents demanding to know why their kids were discussing well-endowed men. But my nervousness turned to excitement as my students boiled with fundamentalist zeal: “If that’s what the Bible says, then why don’t our translations say what the Bible says?”

“Well,” Tremper searched as he looked to the ground. “Translations are filtered through a bit of political correctness.” We could tell Tremper didn’t agree with this. Still, silence and outrage hung in the air. As a professor, I spend a good deal of classroom time instilling in my students a passion to interpret and believe what the Bible actually says. Not what we want it to say, but what it really says in all its grit and occasional offensiveness. Cleaning up God’s word is like editing a love letter and sending it back for a re-write.

But religious people have been covering up obscene language in the Bible for years. Jewish scribes in the middle ages, who copied the Hebrew Old Testament used as the base for all English translations, edited out some vulgar words and replaced them with nicer ones. For instance, God originally prophesied through Zechariah that women in Israel would be raped by wicked, invading armies. The word God inspired is shagel, and according to Hebrew linguists, shagel is an obscene word that describes a sexual act. (No, it’s not where we get the British word “shag.”) But whenever God said shagel (e.g. Deuteronomy 28:30; Isaiah 13:16), the Masorites replaced it with the more tame shakev—“to lie with.” And all of our “literal” English translations agree that the word from the middle ages is better than the one spoken by our Creator.

The Bible is full of obscene language. Ezekiel would have been grounded for several months if he was raised in my house. He talks about huge penises, female genital fluid produced at sexual arousal, and large quantities of semen being “poured out” on Israel—God’s wayward whore (Ezekiel 16:26, 36, 37; 23:20-21). Instead of grounding the prophet, modern translators edit out the vulgarity so that Ezekiel can be read in church. The apostle Paul was so enrapture by the scandalous grace of God that he came dangerously close to cussing: “I have suffered the loss of all things and count them as skubala, in order that I may gain Christ” (Philippians 3:8). The Greek word skubala is more vulgar than crap, but not quite as harsh as s**t. Either way, most translations dim it down by using words like “rubbish,” which means trash, not excrement, or “dung” which is more accurate but far less offensive.

In some ways, it’s understandable that we don’t want to be using this type of language in church. But, on the other hand, the Gospel is offensive. Grace is scandalous. And that’s the real point. The biblical prophets sometimes use offensive language, but not to produce shock for its own sake. Edginess was never the goal, and neither was some vague notion of Christian “freedom.” God’s messengers used vulgar images to shock their religious audience out of complacency. Because sometimes the goodness of God becomes lost in the fog of Christianese rhetoric and religious routine, and the only way to wake us up is to use provocative language.

So how do we reconcile Ezekiel’s filthy tongue with Ephesians 4:29? “Let no corrupting talk come out of your mouths, but only such as is good for building up, as fits the occasion, that it may give grace to those who hear.” Does this outlaw all forms of vulgarity? Not exactly. The word for “corrupting” (sapros) literally means “rotten, decaying, unwholesome.” The whole point is not to forbid certain words that are labeled “cuss words” by its culture, but all speech that does not “build up.”

Paul’s warning here does include using obscene or vulgar language that tears someone down, reflects worldly motives, or in any other way that’s unfit for a redeemed way of life. But “corrupting” primarily refers to slander, gossip or any other speech that tears someone down. Paul refers to the dangerous power of words, all words, when used to dehumanize another human being. Gossiping about a fellow church member, dropping a belittling comment on a blog or Facebook post or holding up a hateful sign at a gay-pride parade are all good examples of “corrupting” talk.

So, in other words, if modern day preachers and Christians cuss or use vulgar terms only to get a rise out of conservatives, they aren’t prophetic, they’re simply immature. Similarly, if you call someone a piece of skubula or blurt out shagel! after stubbing your toe, you’re not being prophetic or biblical, just immature and undisciplined.

But if your Gospel presentation is putting your moralistic crowd to sleep, or if a pharisaic friend is more concerned about proper speech than an addiction to grace, then you may need to tell him that his Christ-less church attendance is nothing more than a bloody tampon until he clings to the Cross, as Isaiah did (Isaiah 64:6). 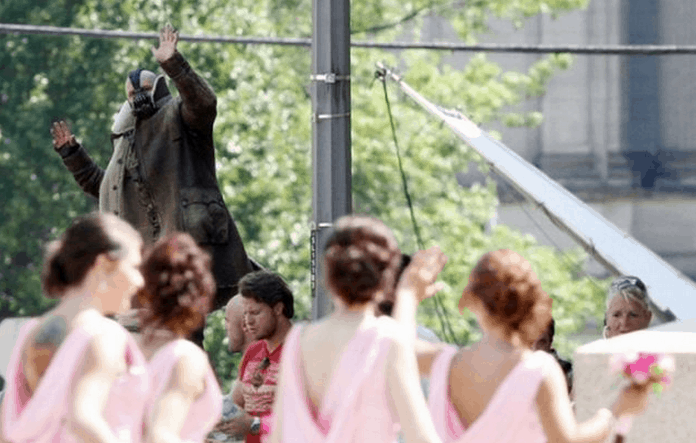 Having Bane at Your Wedding Is a Necessary Evil