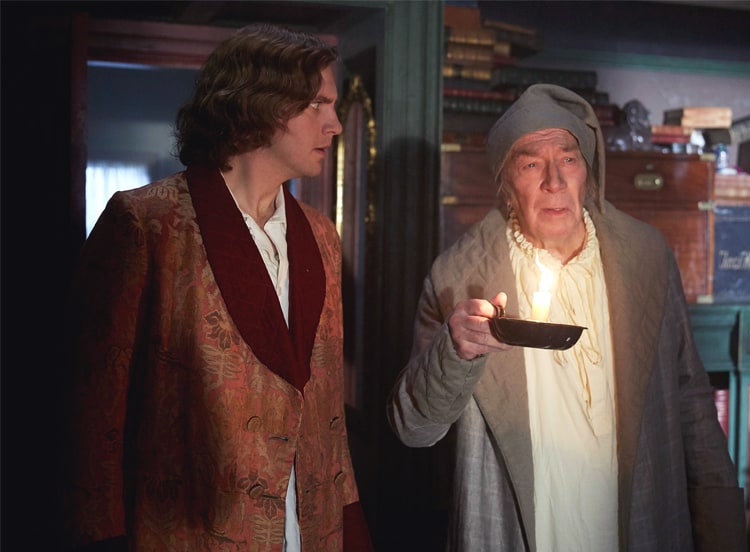 In Hollywood, Christmas flicks are basically ATMs. Put in your card of B-list stars, punch in the PIN of a thrown-together script, and often as not, a decent amount of cash is spit back out. By New Year’s Eve, even the people who saw the project in theaters likely forgot the major turns of the very thinly constructed plot, but are still glad to have spent two hours awash in nostalgia about lost love rekindled, returning home just in time and whatever other tired tropes were thrown in.

Of course, there are exceptions. It’s a Wonderful Life,  Elf, Home Alone, A Christmas Story, Love Actually and a handful of others have managed to walk the line between holiday popularity and being respected as art rather than seasonal schlock. The Man Who Invented Christmas starring Dan Stevens (Downton Abbey, Beauty and the Beast) as acclaimed author Charles Dickens, tells the Christmas tale of, well, how the whole Christmas tale tradition got started in the first place.

WHEN CHRISTMAS WAS A MINOR HOLIDAY

In Illinois, children always get Monday, March 5th off school to celebrate Casimir Pulaski, a Polish Revolutionary War hero, due to the state’s exceedingly large Polish population. What started as an educational holiday is now just a bonus day off work. (Side note: The holiday is also the subject of a song on Sufjan Stevens’ 2005 album Come on Feel the Illinoise).

In the Victorian England Charles Dickens was born into, Christmas was essentially the Casimir Pulaski Day of Winter. There was a church service and possibly a dinner, but there were no Christmas trees or tales of love, forgiveness and returning home to brighten and add meaning to December 25th.

In The Man Who Invented Christmas, Stevens continues his big-screen hot streak by stepping into the shoes of Charles Dickens at a time when the literary legend was starving for another hit, feeling the pinch of the expenses around keeping up his mansion and London lifestyle, and having his meddlesome parents move back in. Add a severe case of writer’s block and a publisher demanding a new blockbuster novel, and you’ve got a character facing a very real crisis.

The stakes, along with the top notch performances from Stevens and Christopher Plumber (A Beatiful Mind, Up) as the fictional antagonist Scrooge are what elevates The Man Who Invented Christmas from another Hallmark Channel retread into a movie worthy of a trip to the theater. The trailer pitches the movie as being about the writing of the holiday and literary classic A Christmas Carol, but there’s a lot more going on here.

Dickens is dealing with extended family tensions, questioning his own abilities and career and worrying about money. In other words, he’s going through what the majority of Americans are feeling just under the skin between Thanksgiving and New Year’s. It’s the payoff of seeing the author work through those internal issues that make this a relatable film which may well find its way into the “Christmas classic” category.

There’s no doubt that the story does live up to the title. By releasing A Christmas Carol, Dickens did indeed set the path for what modern Christmas has become. But rather than blaming him for the over-commercialization of Christmas, the movie helps shed light on the fact that he took the often-ignored holiday of Jesus’ birth and injected December 25th with some often forgotten values, creating a month of goodwill, charity, forgiveness and loving your neighbor.

While The Man Who Invented Christmas only focuses a six-week period of Dickens’ life, there’s plenty of material for a proper biopic. Born into a middle-class British family, young Charles’ life was thrown into chaos when his father’s poor judgment with money resulted in a stint in debtor’s prison, and a new life working from 8 a.m. to 8 p.m. in a factory for 12-year-old Charles. Even in such terrible conditions, the young boy rose above his peers in work ethic and attitude.

When his father’s prison sentence was up, Charles was able to return to school and hone the skills to become England’s greatest novelist. Although A Christmas Carol wholeheartedly embraces the virtues of Christianity, Dickens’ early years of hardship left him with a bitter taste for both the aristocracy and their high-church elitism. In Dickens’ day, the English Church turned a blind eye to the suffering of the poor and the exploitation of children for cheap labor, often in dangerous jobs.

It’s impossible to accuse Dickens of holding too tightly to orthodoxy. In his last will and testament, penned in 1869, he wrote, “I commit my soul to the mercy of God through our Lord and Saviour Jesus Christ, and I exhort my dear children humbly to try to guide themselves by the teaching of the New Testament in its broad spirit, and to put no faith in any man’s narrow construction of its letter here or there.”

They are the final words of a man who spent his life battling against the corruptions of the church power structures of his day, but in the end still entrusted his soul to Christ. While it’s not recommended to take Dickens as a theologian, there’s no doubt that Charles really did put Christ back into December 25th.

The Man Who Invented Christmas is an above average holiday film that tells the story well. To further unpack the complicated faith of the man himself, a trip to the bookstore will be required.