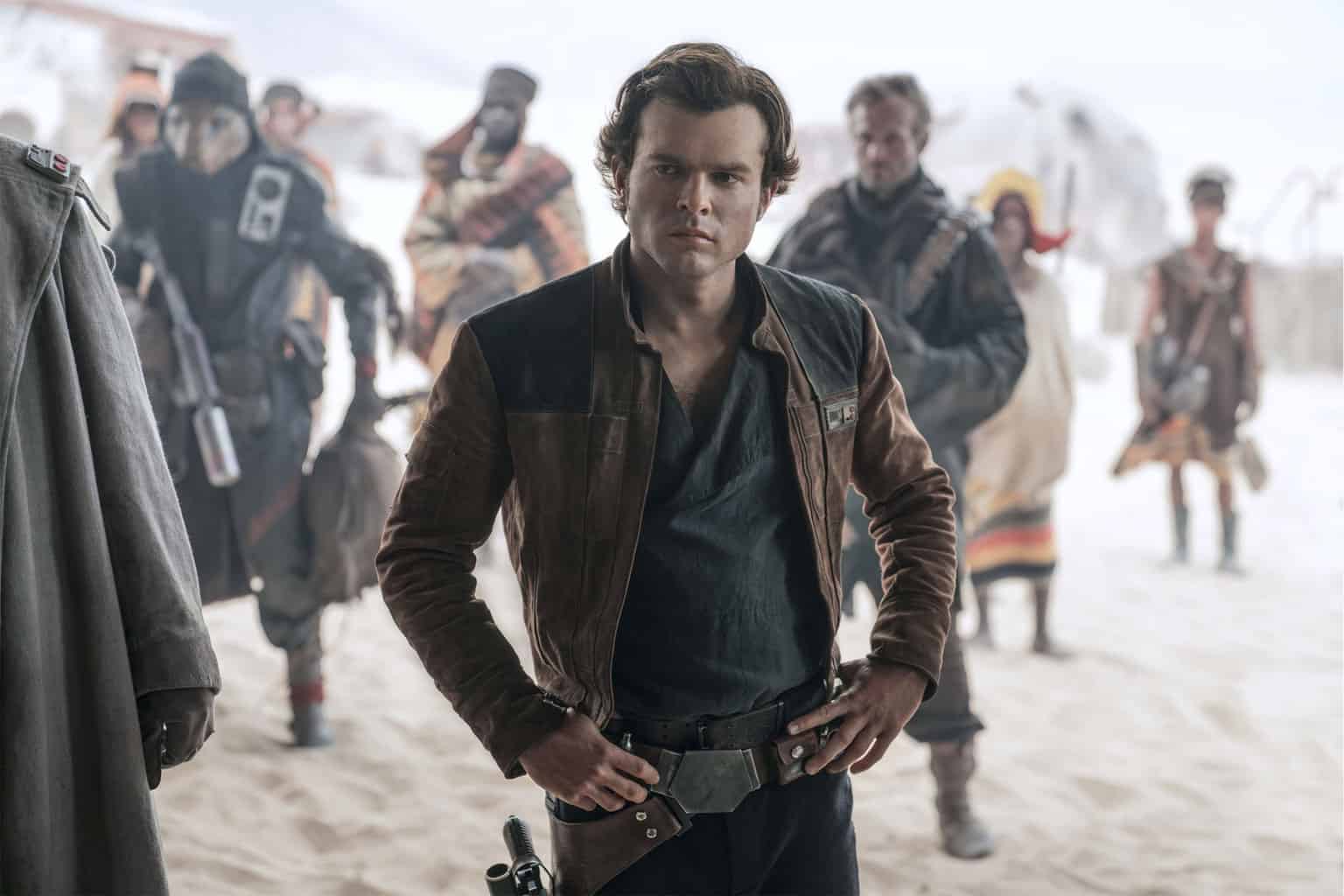 Even if they’re flying the same plane as everyone else, you can always pick out the ace in the squadron. The other flight paths might be cold and mechanical, but the ace has flair. Tom Hardy’s Dunkirk plane is awash with cool savvy. Maverick’s F-14 in Top Gun is sleek and cocky. Poe Dameron’s X-Wing raises the middle finger. A pilot’s attitude can permeate their vehicle, to the point that even a machine can have style. It’s ironic, then, that Solo feels somehow indistinct from the other Star Wars movies. It’s solid—fun and accelerated and confident—but its landing is almost too robotic. Star Wars is still good, but it’s never been less thrilling.

You know Solo even if you don’t. It’s the origin story of Harrison Ford’s pantheonic Han Solo from the original Star Wars trilogy. This time, the galaxy’s slickest (and most handsome, let’s be honest) smuggler is played by Alden Ehrenreich, and we follow the young Han as he becomes the shoot-first renegade we meet in A New Hope. Chewbacca is here, and so is Lando Calrissian (Donald Glover), plus a whole array of new characters who work in tandem to form our titular anti-hero.

Taken by itself, Solo is a terrific ride. Ehrenreich has to stretch his legs a little at first, but especially in the movie’s back half, his charisma jumps off the screen. You really like him. Han takes us through a gauntlet of classic hits we heard rumors of in the original movies. Solo explains how Han earned his name. It shows us how he meets Chewbacca and Lando (the latter is a high point), it details the infamous Kessel Run (the most bonkers, armrest-gripping part of the movie), and it explains some more nuanced aspects of Han’s character that to elaborate on further would say too much.

The movie works, but man, you wish it worked harder. There’s a feeling here of meeting the bare minimum, and that means the movie has a fleeting quality to it that, while in a funny way is reflective of Han himself, feels out of sync with what Star Wars has always been in the past. These movies have been massive, culture-shaking events for decades, and for a number of reasons, Solo doesn’t have that same sort of special-ness. It’s fun, but that’s all, and it gives Star Wars a totally new quality: disposability.

At first instinct, you might argue that a better, more original movie would lend Solo some hype. Instead of leveraging the low-stakes situation of a (maybe) stand-alone flick to experiment with genre, style or tone, Solo keeps things pretty vanilla. This could have been an Ocean’s-esque heist movie. It could have been a cocksure Western. It could have been a Star Wars version of Fast and Furious (it’s probably closest to that), but it never really commits all the way to one of those ideas. There are nods to a lot of these corners of storytelling, but when they’re all mixed together, you have the same brand of Star Wars movie with a little extra pepper on it, not an exciting, inventive reimagining.

But on second thought, you can see a totally original and distinctive Solo that still comes out to this level of relative malase. By and large, people didn’t anticipate this movie in the same way they anticipated The Last Jedi, Force Awakens or even Rogue One. It isn’t likely that apathy has anything to do with Han Solo as a subject—by most measures, he’s the most popular and important character in the Star Wars universe, at least second to Vader—so it must have something to do with the timing, or the moment, or the season.

We had a Star Wars movie six months ago. The Last Jedi—however you felt about it—was significant and momentous and a complete cultural event. We hyped it up for weeks beforehand and we debated it and unpacked it for weeks afterward. Even as the third Star Wars movie in three years, there was still a kind of “I can’t believe this is happening” feeling of sitting in a crowded theater, hearing the opening trumpet blasts, and seeing the great yellow text: STAR WARS! appear on screen. Could you believe it? Another Star Wars? In 2017?

Solo doesn’t feel that way at all. You have to really kick-start your brain to remember that, wait a second, we’re witnessing an entire two-hour movie about Han Freaking Solo this summer. And it’s a good one, too! None of us were prepared for more Star Wars when Disney and Lucasfilm announced the new trilogy all those years ago. When we heard there would be a new movie every year for the foreseeable future, we cheered. But we also weren’t prepared for Star Wars to become normal. Those rare, special moviegoing events we bought tickets for weeks in advance and lined up hours early for aren’t rare and special anymore. They happen all the time. It makes you miss the past, even though in the past we would have done anything to have as much Star Wars as we do now.

You will probably like Solo—it’s strong across the board—but you might forget about it as soon as you throw out your popcorn bucket.  It used to be a huge deal to go back to the galaxy far, far away, but now those adventures have become routine. The first time we took the jump to hyperspace in the Millennium Falcon, it was a shot to the arm. These days, it just feels like cruise control.