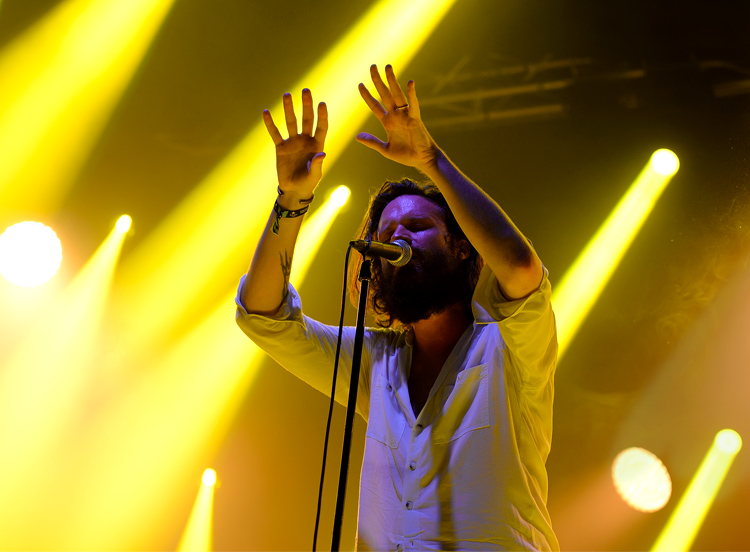 Josh Tillman, the singer-songwriter better known as Father John Misty, is quickly becoming one of the most interesting musicians in indie rock.

His 2015 album, I Love You, Honeybear, was a concept album about love that was filled with Tillman’s signature cynicism and sarcasm. Now, Tillman has decided to take on more complex topics.

The former drummer of Fleet Foxes recently released his third solo album, Pure Comedy, a sprawling epic with dense meandering lyrics about religion, politics and the future of humanity—all through the medium of folk-rock piano ballads evoking the sound of Elton John or Tobias Jesso Jr.

Listening to the album from beginning to end is both an enjoyable and exhausting experience.

While listening to Pure Comedy, the lyrics I found to be most interesting were those concerning Tillman’s views about God and religion.

As a child, Tillman was raised in an evangelical Christian household and was not allowed to listen to secular music until the age of 17. Now at age 35, Tillman is critical of his childhood faith.

On the title track “Pure Comedy,” Tillman summarizes Christianity as “something that a madman would conceive” and “something to numb the pain with.” On “Total Entertainment Forever,” he asserts there are “No gods to rule us.” Like John Lennon, Tillman asserts that God is a concept by which we measure our pain. Thus, Tillman bleakly concludes on “Pure Comedy” that, “I hate to say it, but each other’s all we got.”

Although Tillman has firmly established that God does not exist, he somehow feels the need to chastise a nonexistent God about His flawed creation.

On “When the God of Love Returns There’ll Be Hell to Pay,” Tillman decides to take God “on a quick tour of [His] creation’s handiwork.” Tillman examines the darkness and savagery of the human experience and expresses, “If this isn’t hell already then tell me what the hell is.” Tillman then suggests that God should “Try something less ambitious the next time [He] gets bored.”

Given Tillman’s tendency to fill his work with exaggeration, cynicism and sarcasm, it would be foolish to take any of his lyrics at face value as representing Tillman’s actual thoughts. However, I do believe we can safely assume that Tillman shares the view of Nietzsche that “God is dead.” And also like Nietzsche, Tillman appears to have “personal demons that are screaming,” as he acknowledges on “Smoochie.” During a recent interview with the New York Times, Tillman explained that he has severe depression and anxiety and self-medicates with micro-doses of LSD.

Pure Comedy captures an inherent flaw of some lines of atheistic thinking that expose the problems that plague mankind, but offer few solutions.

Also, what would he do differently than God in creating the Earth and humankind? Perhaps he would create a world where every human lives a perfect life free from suffering, disease or hardship. However, without suffering or hardship, wouldn’t life also be lacking the potential for true love, courage, empathy and charity? Wouldn’t every human merely be a robot with infinite pleasures? Wouldn’t a world free from suffering resemble the utopian nightmare that Tillman describes in “Total Entertainment Forever?” Perhaps God is a little more qualified to create and manage the universe than we are.

Tillman further exposes the irony of God creating flawed humans and then having “the gall to judge us.” He asserts that God “must not know the first thing about human beings.” Here, he exposes a significant problem that no philosopher, political ideology or religion can resolve—except for teaching of the Gospel.

Through His teachings and His example, Christ provides the only answer for how a loving God could simultaneously judge sinful humans—who are given the capacity to sin so that higher goods such as love and mercy can exist—and at the same time, pay the debt for our sins and provide a way for humans to be redeemed and have fullness of life. Contrary to the album’s assertion, God knows everything about being a human being. As Hebrews 4:15 states, “We do not have a high priest who is unable to sympathize with our weaknesses, but we have one who has been tempted in every way, just as we are—yet was without sin.”

Jesus suffered and endured the multitude of physical, political and spiritual problems that the album explores. Thankfully, in addition to relating to these problems, He also provided solutions.