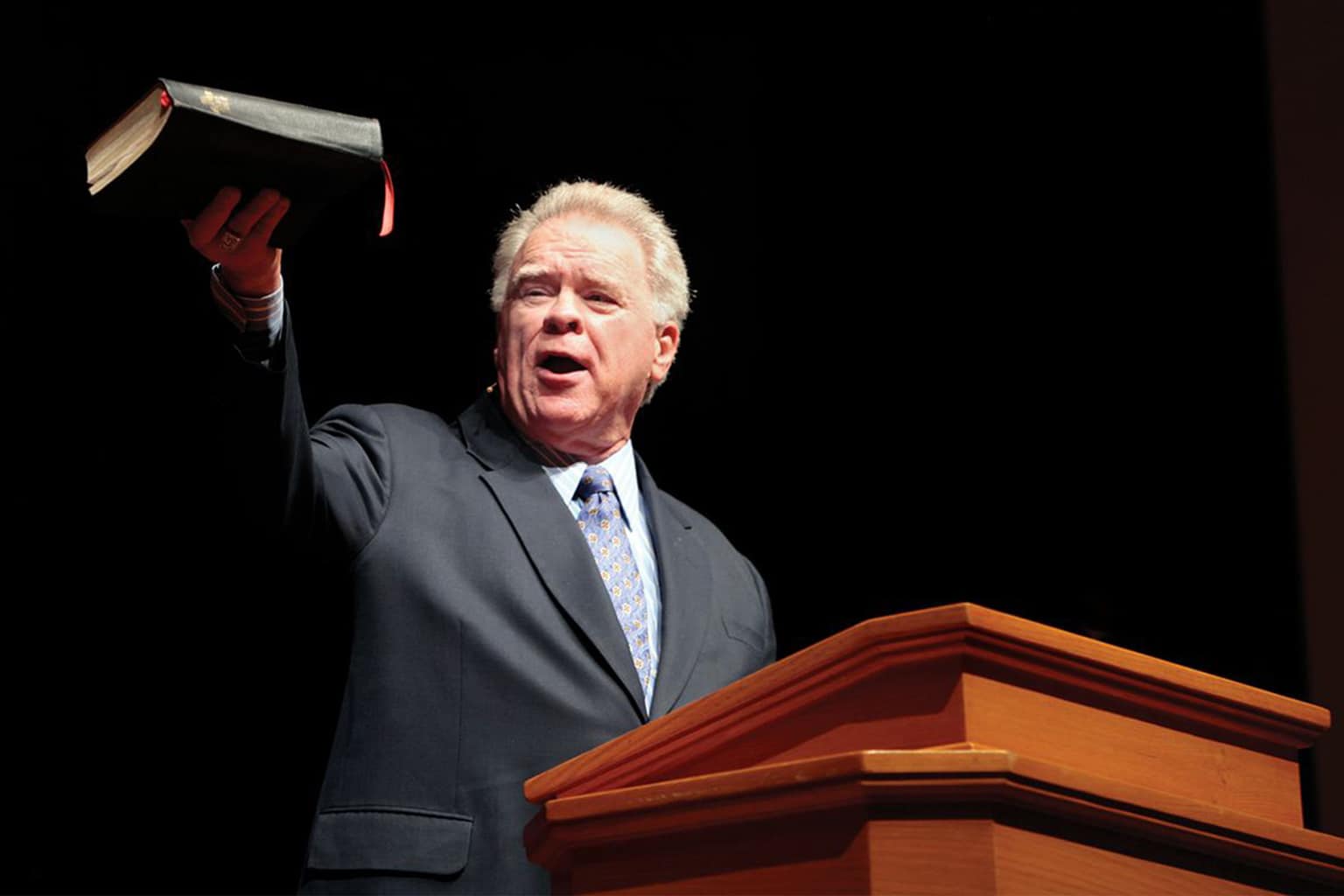 There has been reason for concern for the moral witness of America’s largest denomination, and the Southern Baptist Convention has found itself at a crossroads. So when the SBC met in Dallas this week, they did so with the opportunity and need to define a new direction for evangelicalism in America.

Like most years, leaders and messengers (church representatives) gathered to pray and pass resolutions on behalf of the 46,000 autonomous churches that contribute to the SBC. Unlike most years, this meeting was preceded by months of tumult surrounding the #MeToo movement and former seminary President Page Patterson, and was attended by none other than Vice President Mike Pence.

The Vice President’s appearance comes at a crucial time for the denomination. Just two years ago, 81% of white evangelical voters supported Donald Trump, while SBC leadership (especially the president of the denomination’s policy arm, Russell Moore) kept up an ongoing campaign of condemnation.

Just weeks ago, Paige Patterson was finally and comprehensively fired after months of heated controversy surrounding the objectification of women, domestic abuse and the handling of rape allegations at Southwestern Baptist Theological Seminary. Through it all, a new guard formed of theological conservatives (like Russell Moore and Village Church pastor Matt Chandler) who, alongside gospel-oriented preaching, have urged for racial reconciliation and compassionate immigration reform.

These stances have often put them at odds with the “Moral Majority” breed of baptists who were excited to see Donald Trump’s Vice President at this year’s convention.

While the Vice President’s appearance was disheartening for many sympathetic to the new guard, three crucial moments from this year’s SBC offer a considerable amount of hope.

1.) The Election of JD Greear

JD Greear, a non-Texan, was nominated to the position of SBC President by non-Texan pastor Ken Whitten, in Texas. He ran against Texan Ken Hemphill, the former president of fellow Texan Paige Patterson’s Texas seminary. The election, held in Texas, was won by Greear in the denominations largest landslide in almost 40 years, and gave the SBC it’s youngest president ever.

This election was a resounding victory for the new guard, who Greear represents with aplomb. He prioritized racial diversity in his platform, calling for baptists to “recognize the leadership gifts of brothers and sisters of color… and embrace their leadership.” And in some of his first remarks as SBC president, Greear said that the presence of Pence “sent a terrible mixed signal,” and rebuffed any sentiment that baptist’s identity should be found in a political party or particular civic leader.

JD Greear’s overwhelming election sets the SBC on a radically fresh course–and one that runs directly counter to the conventional wisdom that a republican vice president must be a welcome sight at the SBC.

The raft of resolutions passed at this years SBC has many of the usual suspects: Billy Graham was commemorated, the 50th anniversary of Southern Baptist Disaster Relief was celebrated, Arab Christians were prayed for and supported.

However, there were also several votes this year that responded directly to the current times. The first resolution passed celebrated the “dignity and worth of women”, and called on Southern Baptists to “encourage, cultivate, and celebrate the diverse gifts, callings, and contributions of women in biblically appropriate ways.”

Even more timely was the resolution regarding abuse, where the SBC celebrated the courage of those involved in the #MeToo movement. The resolution explicitly condemns all forms of abuse, asked for forgiveness for SBC churches and institutions prior failures to protect the abused, and made a strong declaration of support for contacting law enforcement authorities when abuse is suspected or has occurred.

Race and minority rights were also addressed, with a straight forward resolution condemning racist “Curse of Ham” theology, and a reaffirmation of “the full dignity of every human being,” including the unborn and people of all ethnicities, political parties, and religions.

Particularly pressing in anticipation of Pence’s speech was a resolution entitled “On Immigration,” which condemned the division of families, called for compassionate immigration reform, and declared that “any form of nativism, mistreatment, or exploitation is inconsistent with the Gospel of Jesus Christ.” Additional resolutions called for addressing the crises of opioid addiction and gun violence.

Outside of the formal resolutions, two failed votes also helped paint a picture of the direction of the denomination. In an unprecedented move, a motion was raised to disinvite Vice President Pence.

Though the motion ultimately failed, approximately 30% of the Convention voted to disinvite the Vice President–a particularly notable number due to the 81% of white evangelicals voters who supported Donald Trump in 2016. On the ground sources indicated that many who did not support the resolution also did not support the decision to allow the Vice President to speak at the convention, but felt unable to rescind the opportunity once granted.

Finally, in a direct referandum on Russell Moore, a motion to fully and completely defund his organization, the Ethics and Religious Liberty Commission (ERLC), failed spectacularly. Only a handful of voters supported the motion to defund, with thousands more voting to preserve the ERLC, which consistently works to address issues relating to racial reconciliation, pro-life policies, immigration reform and religious liberty for all.

3. The End of Paige Patterson

One of the most dramatic moments of the convention was the apparent final chapter of the Paige Patterson saga. Before Paige Patterson was ultimately fired from Southwestern Seminary, but after several disturbing comments relating to domestic abuse and objectification of teenage girls came to light, the Southwestern Board of Trustees voted to remove Patterson from his position as President, and offered him the paid position of President Emeritus. This offer was short-lived. When new stories about his treatment of a sexual violence case at Southwestern came to light, he was duly fired.

In response to this drawn-out and convoluted process, SBC messenger Thomas Hatley raised a motion condemning the Board’s “hastiness,” and called for their immediate removal. In one of the most powerful speeches of the convention, Bart Barber, a member of the Executive Committee of Southwestern’s Board of Trustees, delivered a frank assessment of the process and Patterson’s actions.

In his statement, Barber confessed to being one of the Trustees who urged a slow and steady response to the allegations and public statements. He explained why he had initially supported Patterson, and some of the reasons why the process was as dysfunctional as it was. But facing the man who opposed his ultimate decision to fire Paige Patterson, a man who had long been held as one of the most powerful voices in the denomination, Barber pleaded the SBC to oppose the measure so that men like Patterson could be held accountable in the future, and so future trustees might have the courage to make difficult decisions–and not worry that standing against corrupt icons would result in their summary removal.

His statement, and the vote to preserve the trustees closed the book on an ugly chapter in SBC history. Patterson had been confronted, demoted, fired. The body that ultimately held him accountable was protected from those who continued to support Patterson. And in the midst of all this, women were extolled, and abuse was condemned.

It has not been an easy year for the Southern Baptist Convention. Political forces have sought to take advantage of the shifting social order that puts conservative evangelical institutions like the SBC in jeopardy. Work done to support  people of color and immigrants has been slandered. A #MeToo scandal ripped the bandaid covering up a culture of toxicity that pervaded one of the most prominent Baptist seminaries and infiltrated churches across the country. But that isn’t the end of the story.

At this year’s Convention, a sitting republican Vice President faced a strong repudiation and his invitation was critiqued by the youngest SBC president in history, who won in a landslide. A denomination notorious for its theological and political conservatism expressed unequivocal support for immigrants, people of color and women. The conservative icon who has consistently challenged President Trump found his ministry validated in an almost unanimous vote.

This was the big one–and SBC18 signaled a dramatic departure from an evangelicalism defined by conservative politics, pivoting instead into a full-throated embrace of an inclusive and compassionate church guided by the Gospel.

‘The Incredibles 2’ Has the Strength to Surpass the Original