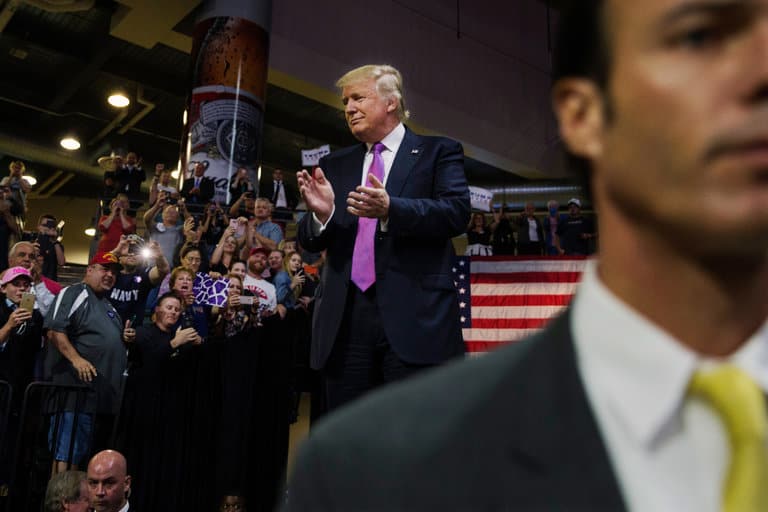 Donald Trump will visit Mexico Wednesday and meet with President Enrique Pena Nieto in Mexico City. President Pena Nieto’s office said that invitations were sent to both Trump and Hillary Clinton—Clinton’s campaign has yet to confirm its invitation.

You have to think whole wall thing will dominate their discussion.

After Trump’s meeting with the Mexican president, he will return to the United States to deliver what his campaign is calling a major immigration speech in Arizona.

The speech comes as people have called for more clarity on Trump’s immigration stance, saying he’s wavering. He has recently suggested that he may soften some of his proposals, but he remains steadfast that Mexico will pay for the proposed wall.

This trip comes after more than a year of tension caused by Trump’s comments about Mexicans, beginning with the infamous speech he made to announce his candidacy, saying that Mexico was “bringing their worst people” including rapists and crime- and drug-ridden people.

Trump has also consistently promised to build a wall between the United States and Mexico that Mexico will pay for, deport millions of undocumented immigrants and undo the North American Free Trade Agreement.

Mexico’s President has previously denounced Trump, comparing him to Hitler and Mussolini because of his populist statements.

There have been episodes in human history, unfortunately, where these expressions of this strident rhetoric have only led to very ominous situations in the history of humanity. That’s how Mussolini got in, that’s how Hitler got in, they took advantage of a situation, a problem perhaps, which humanity was going through at the time, after an economic crisis. And I think what (they) put forward ended up at what we know today from history, in global conflagration. We don’t want that happening anywhere in the world.

Pena Nieto and the rest of the current government have refrained from speaking out against Trump considerably, other than to say that Mexico will not pay for a border wall.

This will be Trump’s first meeting with a head of state as the Republican nominee, according to The New York Times.

Thoughts Everyone Has Secretly Had While Bored at Church