A new analysis of America’s social media and internet habits found that of all the significant news events of the last few weeks, nothing grabbed our attention like the defamation trial between former celebrity couple Amber Heard and Johnny Depp. Axios found that we engaged with far more news reports on that trial than we did stories about Russia’s war in Ukraine, Elon Musk’s Twitter saga or even the Supreme Court’s leaked draft about the fate of Roe v. Wade.

NewsWhip found that social media engagement on the trial far outpaced any such interest in issues like rising inflation or abortion coverage. People Googled “Amber Heard” twice as much as they searched for Elon Musk and more than four times as much as they did abortion or the Supreme Court. 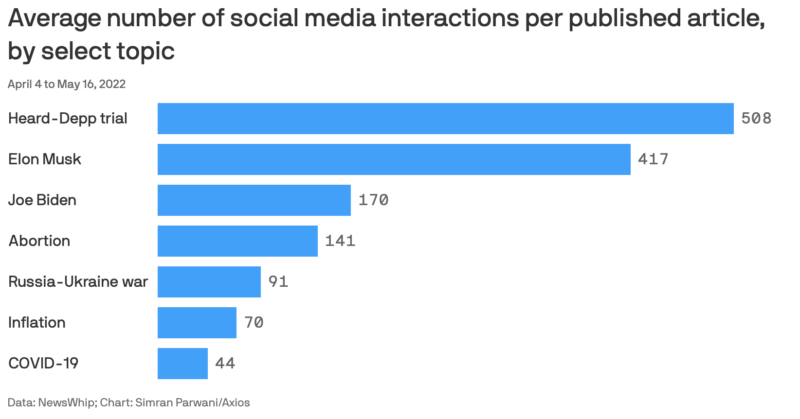 The trial finds the two actors in a bitter battle over defamation with a case that has brought up numerous allegations of domestic abuse. Rachel Stockman, president of Law&Crime network, told Axios that “hands down [the trial] is a record setter for us,” and data from SimilarWeb shows that outlets covering the trial are seeing significant traffic boosts. Tiktok and Instagram have helped proliferate memes that have driven interest way up.

But that interest has come at a cost. Some domestic abuse survivors say the trial’s popularity has been difficult for them, since their own experience was hardly fodder for internet jokes and tabloid fodder. Moreover, many have noted that Depp commands far more online defenders than Heard, despite her credible allegations of his treatment of her. Wired found that #justiceforamberheard had 39 million views, while #justiceforjohnnydepp had over 10 billion.

It’s understandable that Americans are interested in this trial, but it’s undeniable that there’s a limit to the amount of news we can handle. Depp and Heard’s trial does touch on interesting, important topics that Americans need to engage in — but very little of the current conversation around the trial actually looks like a serious reckoning with domestic abuse in the U.S.