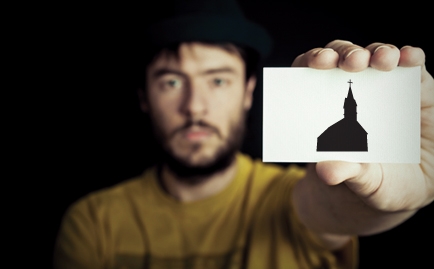 I once went to a savagely countercultural Christian festival, in which mohawks abounded and the tattoos were so abundant that the ink in people’s skin could have filled an Olympic swimming pool. The branding, slogans and logos of this event radiated an ethos of revolution and status-quo-stomping. And I found myself wondering: What is it that tempts people—even the most visually insurgent—to seek out an identifying brand, a label to define them?

Though it’s often hard to put it into words, something just doesn’t feel right about the persistent flow of imagery, branding and logos into our minds—especially when this has become a regular practice of our churches. But if branding, websites and logos all seem necessary and inescapable rules of the church-marketing game, how can one even begin to think about branding in light of Christian faith?

In the Catholic, Eastern Orthodox and much of the mainline Protestant world, parishes are “branded” after a saint or something venerable: St. Peter, St. Paul, Sacred Heart, All Saints. But in the Protestant evangelical world, a different kind of church branding has developed. It resonates with the latest fashions in commercial trademarking: obfuscation—that is, making something unclear. This is especially a practice of multinational corporations, which, in aiming for global markets, use images devoid of concrete cultural connotations that can be recognized apart from language. Given the trend in distancing religion from religious tradition, are these abstract church logos and websites—composed of scribbles, dots or lines—an attempt (even if a subconscious one) to avoid seeming “too religious”?

There is similar obscurity in the ostensibly hip names and general “branding” of many young, zealous congregations. We hear names that are cryptic, apparently prompting intrigue. And being fairly generic on the face, these church names might designate some difference from old-fashioned traditions and “organized religion”: Warehouse 242, Journey, Willow Creek, etc. (I owe so much to the latter and love them dearly. They truly are amazing people.) Consider how many churches in your area don’t even have the word “church” in their name!

Obviously the strengths that come from branding a ministry with logos, websites, names and catchphrases that echo the trends in the corporate world are similar to what marketers get out of branding. A church will get “brand recognition” from its logo, aesthetic comfort in its design and perhaps an encouragement that this congregation has gotten a facelift since the ’80s.

Essentially, when you use modern branding, you assure potential church visitors that this thing—your church—is fresh and in style. The right brand ensures visitors can trust that the people behind this brand are “real” and “authentic,” unlike those churches with “corny” logos.

How does branding “reach” people?

“All of this is well and good,” you might say, “but branding—the logo, the name, how the church looks—reaches people.”

Of course it does. But how does something as anonymous as a brand identity or logo reach and affect people? And if that impact is neutral, unobtrusive and anonymous (as most brands seek to be), devoid of direct relational contact, then isn’t it essentially vacuous and meaningless? Might that be counter-intuitive to the Gospel?

Granted, many forms of Christian propaganda are semi-anonymous; a sermon or a tract, for example, is sent out as a blanket message. But those explicit mediums can be responded to and critiqued with some accountability. But the logo, however, is cast into the world as some kind of subliminal message. It is not even a message as much as a “sense”—almost a sort of eternal icon. If your brand is “good,” it tells people your church is “good” based on a culturally learned series of decoding steps. In the logic of debate, we all know you should not judge the contents of a book by its cover. So something is fishy when people are anonymously drawn in by an abstract, “good” logo.

When we create brands or logos that are generic, abstract and intentionally devoid of meaning, are we suggesting our churches have no meaning? Or have our brands made people assume our churches ought to be comfortable?=

If you feign “neutrality” and distance from religion—that you are “spiritual, not religious”—what kind of letdown are you setting seekers up for? What a bummer when they find that Jesus had an opinion about controversial matters. While your logo comforted them, the gospels might frighten them.

The real brand of Christianity

The ultimate critique of “branding” or logos is the more specific, concrete and fertile-with-meaning crucifix. The crucifix is the most sober logo yet depicted. It declares that, even if God were among us, we would respond with torture and murder. And upon this cross, even God screams about the abandonment of God in the midst of torture. It speaks not of some ideal of love, but, referring to a real event, says Love in our world was crucified.

But, on the other hand, the crucifix liberally douses on the faith, hope and love, inferring that sacrificing for love in a terrible world is actually worth doing. The crucifix relies not on pretty designs, a beatific vision of heaven or a concept of a metaphysical God, but centers upon a human and what humans did to Him. And it is inclusive enough to not only infer humanity’s uniting with God, but also humanity’s distance from God.

The crucifix is also the only logo that aims for its own destruction and outdated-ness. The crucifix depicts torture and sacrifice so that both might stop. While we had killed the righteous in ages past, we built them monuments and decorated their tombs, saying, “We wouldn’t kill the innocent.” This cover-up assured the continuance of the cycle. With Jesus’ murder we made a turn for honesty in our images. We don’t decorate a tomb but point to what we have done; we let the truth of our violence speak. But with eyes no longer trained to see God on a cross, the danger is we will fail to point to the murder of innocent victims in our day.

Practically stated, the crucifix should not be “spruced up” every decade to keep it aesthetically pleasing. The moment the cross becomes pleasing, it is demonic. In being so clear and provocative, the crucifix also helps us interpret other images, events or spirits—as Paul was finally able to see that his participation in the stoning of Stephen was actually participation in violence against Jesus—“Why do you persecute me?” From then on, Paul’s “brand” became crystal clear: “Christ crucified.”

So, we might urgently ask then, why the recent and pervasive fashion in not depicting the Son of God being tortured? Why the move toward abstract logos and branding? When I asked an elder from my beloved Willow Creek why they weren’t using a cross in their decor, she said, “It is too confusing of an image, loaded with religious meaning and baggage.” I then asked why they had started hanging an American flag in the post-9/11 war-fever, as that certainly seemed to be a loaded image. Her answer was that there were many people at Willow in the military who they didn’t want to offend by not having it posted.

Ol’ Glory is soothing; torture, especially of the Son of God, is offensive. But this is the confusing status we put ourselves in when we engage in obscurantist image-making: our pretty brands, which imply distance from stuffy old religion, disable us from being able to speak with definitive clarity about what actually matters. In other words, our efforts to make our message a little more attractive, a little more sexy, a little more marketable may result in a message that doesn’t mean anything at all.

Chris Haw is the co-author of Jesus for President. He is an adjunct professor at Cabrini College in Camden, N.J. This article is excerpted from a much larger piece that originally appeared in Neue magazine. To get more articles like this one, you can subscribe to Neue by clicking here.

Politics Can’t Save Us