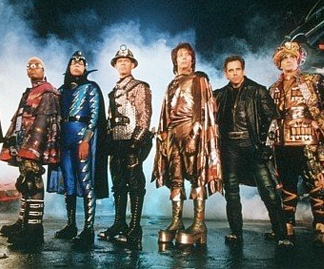 In Mystery Men, a movie from a few years back, William H. Macy, Ben Stiller
and Hank Azaria starred as a trio of lesser superheroes with fairly
unimpressive superpowers. The opening scene is in Champion City, a
metropolis in a slightly altered (but not enough to really work) comic
book-style reality, where costumed crimefighters (many with mediocre "powers") are in oversupply, to the point that many of them are out
looking for work.

Three such individuals are "The Shoveler"
(Macy), who can wield a shovel pretty well; "Mr. Furious"
(Stiller), who has the "ability" to get very, very angry; and "The
Blue Raja" (Azaria), a self-described “effete British superhero”
who throws forks and spoons (but refuses to use knives), and wears a
green turban (a running joke being that, despite his name, his costume
has no blue in it whatsoever).

This motley crew arrives to
foil a robbery in an old-folks home by a similarly inept band of
villains. They are largely incompetent at what they do, and are quickly
upstaged by Captain Amazing (Greg Kinnear)—this guy is a genuine
superhero, who arrives just in time to save the day and completely
upstages the "wannabe" heroes, who are treated as a joke by the police
officers, villains, civilians on the scene, and Captain Amazing himself.

As
far as faith is concerned, there are a lot of Captain Amazings in the
Evangelical church. As much as I would like to be, I am not one of
them. I feel much more like “Mr. Furious.” I can make lots of noise,
express large emotions … but that’s about it. I wish my faith were really
big. Don’t misunderstand me, I believe in God most of the time. And I
have my moments when I know that I know He is present in my life. But I
have moments when I wonder if I’m wrong; times when I have a taste of
doubt in my soul. Faith is a tricky business for me—the idea of living
my whole life for someone I’ve never seen is a pretty gnarly enterprise.

Some
claim they never experience tension or doubt in their faith. They seem
to project a kind of faith that is always an ecstatic, absolute and
full of an unwavering “knowing” that overwhelms them at all
times—always clean; forever effervescent; never encroached upon with
doubt. These are the super-faith people.

I’m just not there. I
think the whole nature of faith is untidy, and I would argue God made
it that way. I think faith is about persistence in the face of
uncertainty and doubt. Some think faith completely eliminates the
presence of doubt, and that if doubt is present, it is an indicator
that one doesn’t have faith. But I don’t agree.

There is a
great story in the life of Jesus where He asked a guy if he had faith.
The man responded to the Lord, “I do believe; help me overcome my
unbelief!” (Mark 9:24) Notice that it is possible to believe and still
be wrestling with “unbelief.” It turns out that faith is not
about absolute certainty. Just because you have doubts, it does not
mean you do not have faith. The guy in the Jesus-story asked that his
doubt be “overcome” so that it would not be the prevailing force in his
life. It’s a good thing to ask. That is the basic battle of faith—we must fight
so that our doubts don’t drown our faith. But there is nothing wrong
with the struggle.

For many people of faith, the idea of
experiencing doubt at all makes them very nervous. They view the
questions that rise in their minds as evidence of a lack of faith,
which surely disqualifies them from being authentic believers. So they
shove their doubts into their subconscious in Pollyanna-ish fashion.
But what if it’s not true? What if honest doubt is actually the essence
of faith? What if real faith has doubt in the mix, as a coin has two
sides? That would mean struggling with doubt is not a lack of faith; it
would actually be faith!

I think it is healthy to be uncertain
every now and then. Frederick Buechner wrote, “Every morning you should
wake up in your bed and ask yourself: ‘Can I believe it all again
today?’ … At least five times out of 10, the answer should be ‘No’ because
the ‘No’ is as important as the ‘Yes,’ maybe more so.”

It turns
out that considering the “What if it’s true?” juxtaposed up against the
“What if it’s not?” is a healthy thing to do spiritually. We should not
be ashamed if we are drawn like magnets to the uncertainties and
questions inherent in faith. Faith, after all, is not supposed to come
naturally. Faith is the venture of human consideration and divine
illumination. Only in a world where faith is difficult can faith exist.

I
believe God wants people of faith to question, to wonder, to get
disturbed, to seek for tenable answers. Faith is not the quelling of
all sense of doubt, but the result of a choice after one has honestly
and earnestly sought to understand. If this is a true description of
faith, then faith is more like an intense mud-wrestling contest than
anything else. It’s hard, sometimes painful, often disorienting and
always messy—certainly not a cheery, no-conflict, refreshingly bubbly,
perpetual happy place.

Overall, faith has won the day in my
soul. Something deep within me—like the E.T.-phone-home beacon—draws me
inexorably back to the pursuit of the Holy. But I still get thrown and
disturbed from time to time, and I think God likes it that way.