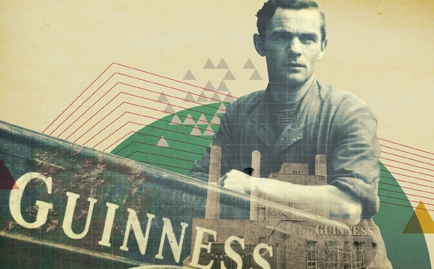 Picture a young man sitting in a large cathedral in Ireland with his wife and small children. He lives around the time of our founding fathers and is a rising entrepreneur in Dublin. His name is Arthur Guinness, and he is a brewer, and it is hard to exaggerate just how important beer was to the people of Guinness’ day.

Guinness lived at a time when no one understood micro-organisms and how disease is spread. They routinely drank from the same waters in which they dumped their garbage and their sewage. Unknowingly, they polluted the rivers and lakes around their cities. People died as a result, and this made nearly everyone in Guinness’ day avoid water entirely. Instead, they drank alcoholic beverages.

Usually, this was done in moderation and all was well. Occasionally, though, excess set in and drunkenness plagued the land. This is what happened in the years just before Guinness was born, in the period historians call “The Gin Craze.” Parliament had forbidden the importation of liquor in 1689, so the people of Ireland and Britain began making their own. It was too much temptation. Drunkenness became the rage. Every sixth house in England was a “gin house,” many of which advertised, “Drunk for one penny, dead drunk for two pence, clean straw for nothing.” It was a terrible, poverty-ridden, crime-infested time.

To help heal their tortured society, some turned to brewing beer. It was lower in alcohol, it was safe—the process of brewing and the alcohol that resulted killed the germs that made water dangerous—and it was nutritious in ways scientists are only now beginning to understand. Monks brewed it, evangelicals brewed it and aspiring young entrepreneurs like Guinness brewed it. And they were respected and honored for their good works.

“Give all you can”

So as Arthur Guinness sat in church on the day we are imagining, he was a successful brewer in Dublin, selling a drink throughout the city that made people healthier and helped them avoid the excesses of the hard liquor that had done so much damage for so many decades.

What makes this Sunday in Guinness’ life so important is who he is about to hear, because on this day John Wesley is in town. Wesley is the founder of the Methodist church, the man who started a small group at Oxford University from which a great revival grew. Wesley and his friends wanted simply to be good Christians—to “perfect holiness,” as they said—and so as they preached the Gospel, they gave to the poor and visited prisoners and raised money to serve the needy. Whole cities were changed by the preaching of John Wesley, his brother Charles and the famous George Whitefield. And now John Wesley had come to Dublin and was preaching at the soaring St. Patrick’s Cathedral. And Arthur Guinness was there.

We do not know exactly what Wesley preached, but we can know a few things. Wesley would have called the congregation at St. Patrick’s to God, of course, but he also would have had a special message for men like Guinness. It was something he taught wherever he went. “Earn all you can. Save all you can. Give all you can,” he would have insisted. “Your wealth is evidence of a calling from God, so use your abundance for the good of mankind.”

On this Sunday and on other occasions when he heard Wesley speak, Arthur Guinness got the message. He also got to work. Inspired by Wesley’s charge, Guinness poured himself in founding the first Sunday schools in Ireland. He gave vast amounts of money to the poor, sat on the board of a hospital designed to serve the needy and bravely challenged the material excesses of his own social class. He was nearly a one man army of reform.

The legacy of Guinness

The Guinnesses decided, first, that they could better society by bettering the lives of their employees. They started by paying better wages than any other employer in Ireland. Then they decided they should provide an entire slate of services to improve the lives of their workers. With the passing of decades, they became one of the most generous, life-changing employers the world had ever known.

At the start of World War II, Guinness promised every British soldier he would have a bottle of Guinness with his Christmas meal. There was a problem, though. Guinness’ manpower was depleted because so many of its workers were serving in the military abroad. Still, they were committed to giving the men and women in uniform a taste of home. The brewery operated around the clock, but there simply weren’t enough employees. Soon, though, retired workers showed up to volunteer their time. Then workers from competing breweries were sent to help. By Christmas, every soldier had his pint, but not until the unselfish efforts of the brewers of Ireland were celebrated throughout the British Isles.

Deeds like these fill the Guinness story and are almost as inspiring as the character of some of the Guinness family members themselves. One Guinness heir received 5 million pounds sterling for a wedding gift, but then moved his new bride into a poor neighborhood to draw attention to the blight of poverty in the land.

Perhaps, though, the greatest lesson to be learned from the Guinness tale of faith is found in a truth that one of the great Guinnesses borrowed from Prince Albert of England. “Gentleman,” he instructed, “find out the will of God for your day and generation, and then, as quickly as possible, get into line.”

This is what Arthur Guinness did when he claimed the highest purpose for his wealth and his beer. It is what Guinness heirs did as they built on their legacy of good and achieved astonishing prosperity through their craft while also doing massive good through their generosity. And it is what is possible today for those who are willing to go outside the four walls of the church and apply a fiery Christian faith to the needs of their times.

The Guinness tale is not primarily about beer. It is not even primarily about the Guinnesses. It is about what God can do with a person who is willing and with a corporation committed to something noble and good in the world.

Stephen Mansfield is the author of The Search for God and Guinness. Read the full version of this article from RELEVANT magazine.

The New Face of Homelessness

Faith from a Distance