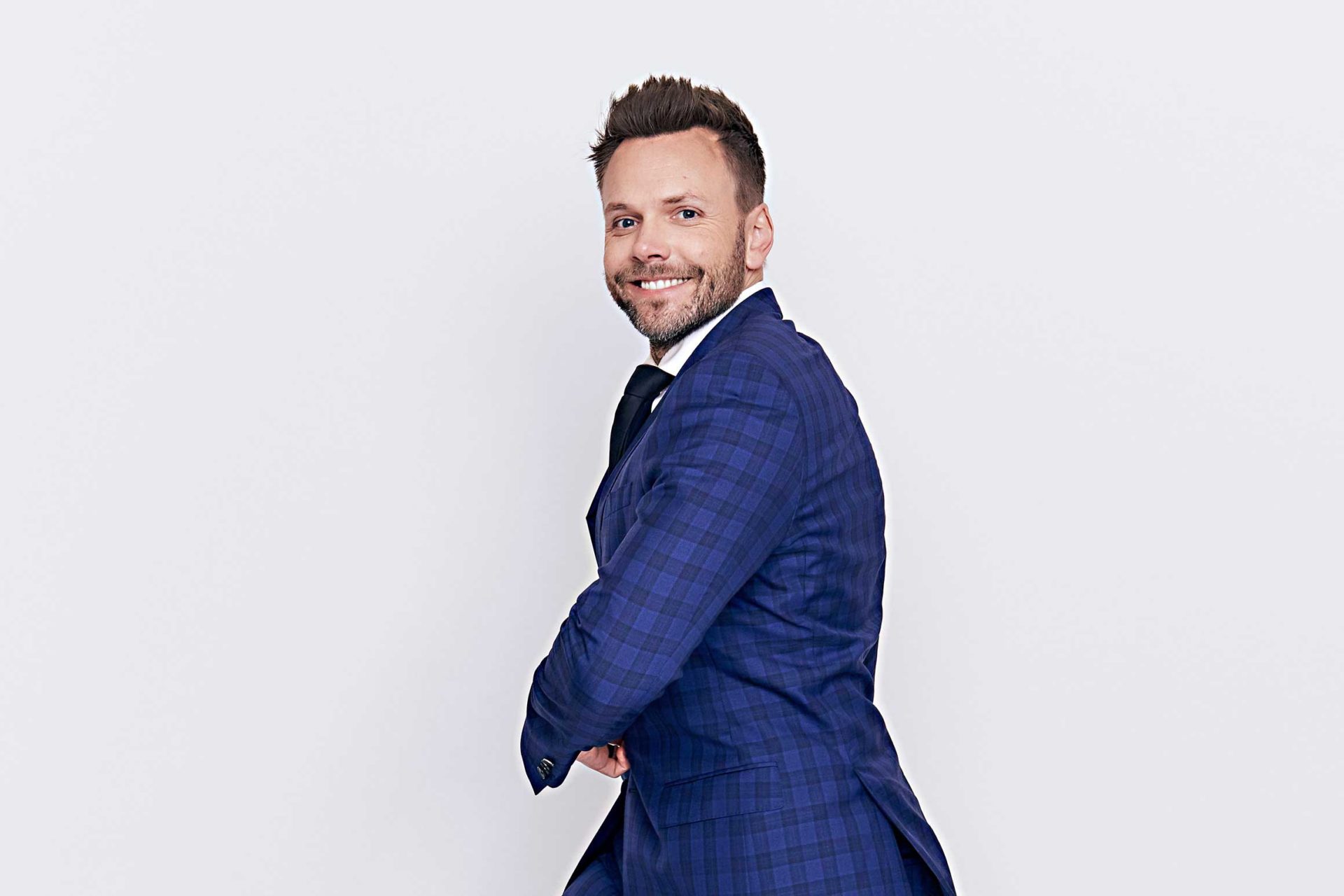 Joel McHale’s Rise to the Bottom

Ever since his days on The Soup, the comedian has reveled in the lowest forms of popular culture. His trick to rising above? He doesn't.

After a joke about heroin, another joke about cocaine, a suppressed F-word, an unsuppressed F-word and a description of his personal hell (the Big Brother house with everyone inside conspiring against him), Joel McHale opened up about his church. It felt like an alternate reality, but it makes sense. Joel McHale’s lived between the real and unreal for decades.

McHale comes off like the guy from high school who wore a path to the principal’s office but showed up at graduation with a diploma and a 3.5 average. He has a cynical 47-year-old voice and messy 27-year-old hair and a satisfied smile that only comes from earning some of the luckiest jobs in show business: The Soup, Community, a Netflix series and a new stand-up tour.

It’s easy to like McHale. He reminds you of the friend your parents worried about: a presumptive bad influence with a charisma and work ethic you admire. “I love playing characters—it keeps me young and away from the heroin,” he says (told you). “I see performing like a sport. If you don’t hone your skills, you don’t work.”

Nowhere is this more true than comedy. McHale is touring a new stand-up act in 2019, but he’s rewriting the first 15 minutes of every show. It’s ambitious, but if that’s what it takes to stay off drugs, so be it.

“I don’t run out there and go, ‘Airline food sucks, who’s with me?’” he says. “I will find every way to win people over. It’s the path of least resistance, and you have to feel it out as the show gets going. That first 15 minutes is gauging what we’re dealing with.”

Most comedians earn gigs by clawing their way through the club scene or catching a break with an improv troupe, but McHale started filling seats because of his hosting gig on E!’s The Soup, which ran for 12 seasons between 2004 and 2015.

It was the perfect match between host and concept. On The Soup, McHale and his band of merry men (including Chewbacca’s lawyer Jewbacca, a cross-dressing swimsuit model named Mankini and something called Spaghetti Cat) scoured the dregs of pop culture for things to riff on, unearthing satirical gold from the bountiful troves of The Bachelor and Vanderpump Rules to the lean veins of unscripted deep cuts, like Steven Seagal: Lawman. No stone went unturned, be it on Judge Judy’s witness stand, inside Oprah’s couch or hidden deep in the jungles of Survivor. The Soup was full of crass puns and bathroom jokes, but despite its low subject matter, McHale always stood tall at its center. He was dumpster diving in American culture for over a decade, but somehow he came out clean.

In fact, McHale looks back on The Soup with a lot of pride. It gave him his stand-up platform, where he can skewer a lot more than Charlie Sheen interviews and Kardashians.

“I’m very fortunate I backed into stand-up,” he says. “So many comics have to earn five minutes here, five minutes there. I’m lucky I can go up and experiment for an hour. I’ve bombed horribly—numerous times—but I’ve been allowed to work on it onstage, thank God. Now that I’ve done 6,000 f***ing comedy shows, I have a much better feel of how it goes. Now stand-up’s a huge part of my career.”

Across 618 episodes of The Soup, McHale asserted himself as the judge and jury of trash culture. He brought uncommon observation to lowbrow things like Keeping Up With the Kardashians and Dance Moms. That incisiveness is key for a comedian, and it’s why McHale can not only tell great jokes onstage, but still talk about reality TV like he’s drafting a thesis.

“After Survivor came out in 2000, there was a gold rush of reality shows,” he explains. “It was wide open and there was a lot more mayhem. Take Being Bobby Brown—Bobby Brown and Whitney [Houston] just allowed a camera to follow them. A publicist would commit seppuku like a samurai warrior if their client did that now. Or like when Britney Spears and Kevin Federline were walking around with a video camera documenting themselves getting high, that wouldn’t happen now on TV.

“Now, reality television’s a lot more homogenized and the mayhem is on the internet,” he continues. “Watching 10 minutes of hoverboard fails probably stimulates the same rubbernecking nerve in people. I don’t even know if it’s reality anymore.”

Jesus would be around the things elitist people would scoff at. He’d be right there in the muckiest muck.

The question of “What’s real?” has been at the center of reality television ever since Jeff Probst introduced us to Survivor and Alex chose Amanda on the first season of The Bachelor. In the early days of the genre, novelty was enough to engage viewers, but as McHale articulates, the boundaries of reality TV had to expand to keep people hooked, and that’s how gimmicks and extremes invaded the landscape.

That’s why on the 11th season of The Bachelorette, the male contestants had to pursue not one but two titular stars. It’s why Survivor became Survivor: Heroes vs. Healers vs. Hustlers in season 35. It’s why Real World birthed two popular spin-offs: Road Rules and The Challenge. Reality TV has always sold itself on being stranger than scripted, but to keep selling, the craziness had to become more and more manufactured.

The rise of the internet meant the insanity worked to not only draw ratings, but attract clicks. It’s great if an on-camera meltdown is seen by 5 million people live, but it’s even better if it goes viral the next morning.

Are general audiences savvy to reality TV’s illusion? Yes. Does that stop them from watching? No, to a point. People buy into some “realities” more than others, and not even McHale understands why.

“These shows are absolutely staged, but for whatever reason, people are on-board,” he says. “It’s a gold mine. Some of my most intelligent friends can’t get enough of The Bachelor, and they’re really wondering if those people are going to find love. It’s crazy to me. It’s a game show about desperate, disturbed people who believe they’re going to get a husband in 30 days! But h***, I’ll watch it. Maybe Jesus would, too.”

“Well, I think Jesus would’ve been close to all those things,” McHale says. “He would’ve been right in the middle of all that stuff. He was never one to fein away from anything. If He were here, He would be around the things elitist people would scoff at. He’d be right there in the muckiest muck, I think.”

What does a famous Christian look like? Do they wear a cross around their neck and mention God in every press junket, like Tim Tebow? Do they tweet Scripture passages and pray for their followers like Latitia Wright? Does their IG story include church services and pastor hangouts, like Justin Bieber? Does being a famous Christian set requirements on your behavior?

What if a famous Christian cursed during interviews? What if they joked about their act keeping them off drugs? What if they imagined themselves sitting in their underwear on the couch, next to Jesus, making fun of contestants on The Bachelor? Joel McHale does those things.

McHale and his wife (he says without her he’d be “a quadruple amputee, for some reason”) have been going to the same Presbyterian church for 19 years. Their church is ritual-centric and modern-feeling, with a special emphasis on serving the homeless. McHale says it’s “wonderfully eye-opening.” When he talks about church, the edge of cynicism leaves his voice entirely.

The expertise McHale flexed on The Soup extends to his spiritual life. He has takes. Non-denominational churches aren’t exactly his cup of tea, he says, but he does enjoy “a progressive church.” Megachurches, with “movie seats and keyboards and people practically being drowned during baptisms” are fine, but not his preference. Raised Catholic, he finds the ritual of the Presbyterian church “ancient and wonderful.”

McHale’s says he’s received some criticism from the faith crowd, and his edge returns at any accusation of disparateness between him and his environment.

“When people ask me if you can have faith in Hollywood, you’re asking me a question that has been answered a billion times,” he says. “I defend Hollywood often. People think there’s a bankrupt morality here. That’s everywhere, dummies! People assume this is a cesspool, which it can be, but that’s true for any profession. Talk about bankrupt and delusional: You have preachers buying second private jets right now.”

As for his perceived trashy TV preferences, McHale’s response is simple: How’s it feel to have that plank in your eye?

“You’re watching it all, too!” he says. “I’m just making fun of it, which is exactly what I would do sitting in my underwear. For me, faith has been a sanctuary, but not somewhere I hide. It’s not a place I go Sunday morning before going out Sunday night to deal cocaine. It’s not like these things are compartmentalized.

“Once you start believing,” he continues, “it’s nearly impossible to extract yourself from faith. It should be in every part of your life. I don’t know what I would’ve done without it, and I shouldn’t take it for granted. I need it. I need Him all the time.”

Watching reality television requires faith. Shows like Real World and The Bachelor are beyond belief, but even if you realize they’re ridiculous, the full experience is only available when you buy into the preposterousness. That’s how the immunity-challenge victories become ecstatic, the season-finale betrayals gut you and the most shocking. rose ceremony. ever. leaves you a wreck on the floor of your apartment.

The more we accept things that defy easy description, the more capacity life has to surprise us. When that surprise is rooted in truth, it expands our conception of what’s possible, whether it’s someone on The Challenge stealing $250,000 from their season-long ally or a devoted Presbyterian dissecting that betrayal with gleeful profanity and devastating insight on The Soup the next day.

For some people, Joel McHale raises the same question as the shows he lords over: What is real? He curses and he makes crude jokes, but he’s also going from this interview to his pastor’s birthday party, and he talks about Jesus like He’s the most important thing that ever happened to him. So if Joel McHale is real, the concept of following Jesus is more expansive, inclusive and daring than what many of us might have thought. In the mainstream cultural sphere, it adds new dimension to our understanding of who Jesus is, who Jesus wants and who Jesus can reach.

The question isn’t what’s real about Joel McHale. The question is what’s possible with Joel McHale, because the image of him and Jesus sitting next to each other on the couch in their underwear has truth in it. This is his reality. Nothing’s for the cameras, and nothing’s for show. 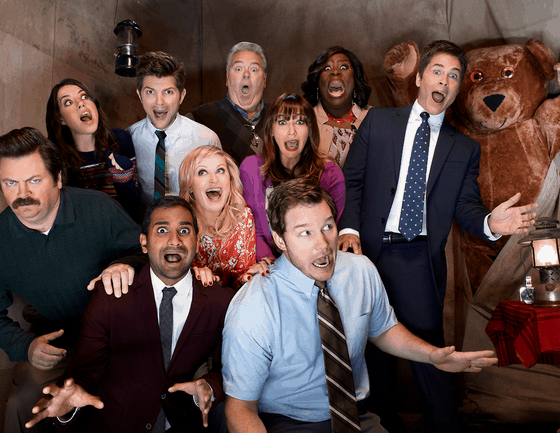 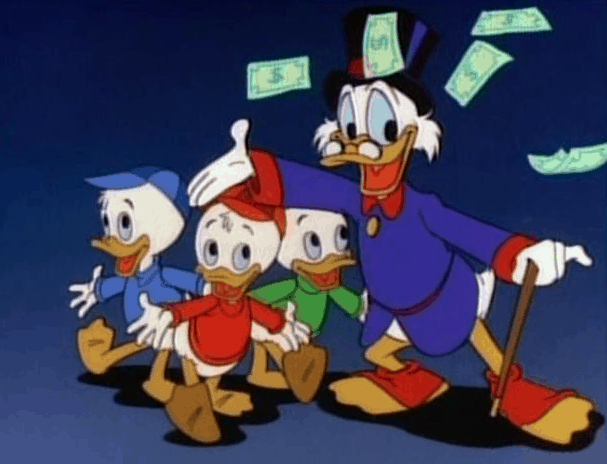 A ‘DuckTales’ Reboot Is Officially Happening