People get the War on Christmas all wrong. The battle does not take place in Washington D.C., Hollywood or Starbucks. It takes place in the grocery aisle, where every year a new food company attempts to hitch their wagon to the seasonal gravy train through an increasingly ill-advised series of reaches. It’s one thing to sell Christmas cookies and red and green M&Ms. But do we really need Christmas Pop-Tarts, Christmas Cap’n Crunch and Christmas Doritos? Where does it end? Here’s where it ends: with everyone dying of food poisoning from the latest entry to the Christmas food canon: Hidden Valley’s RanchNog. ‘

The official description reads: “A ranchified take on the iconic, sometimes polarizing drink marries the creamy, slightly sweet elements of eggnog with the savory, cool and herby flavors of ranch to delight superfans and surprise skeptics with how good it actually is.” That’s all well and good for superfans and skeptics but where does it leave those of us horrified by the very word “RanchNog”? Stuck on the same spinning rock with the people who will actually make this stuff, that’s where.

Oh, and you do have to make it. Hidden Valley is only selling RanchNog kits for you to make it home, presumably because the Hidden Valley Union vowed to walk out en masse if they were forced to mix this stuff, justifiably fearing for both their physical health and mortal souls. 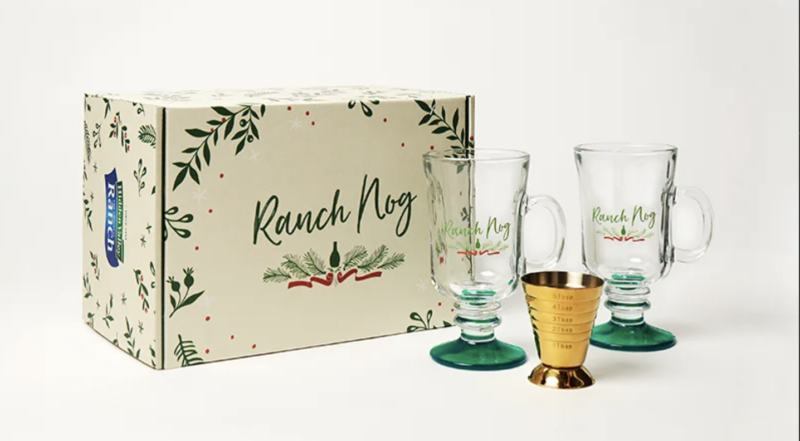 As you can see, this cry for help comes with RanchNog ingredients, a cocktail jigger to expedite your demise and two glasses that will announce to the world that you have fully abdicated the use of your senses. But as with all Christmas gifts, the real meaning of this gift goes far deeper than what can be observed with eye, as RanchNog also contains the festive promise of reminding your friends and neighbors that you can never truly know someone, and those you love best may harbor secret tastes that, if revealed, would render them as unfamiliar as the floors of our deepest oceans.

Obviously, just writing about this white slop would seem to risk spreading the temptation to indulge in its nefarious powers to those of unsound mind. The good news is that is not the case, because this item is no longer available. The bad news is it’s no longer available because it’s sold out, meaning an unknown number of deranged rapscallions have already bought and perhaps even feasted upon this nightmare potion, and who knows what dark magic it is working on them even now. A terrifying thought to be sure, but let us hasten away from such horrors and back to the relative safety of Christmas Pop-Tarts.