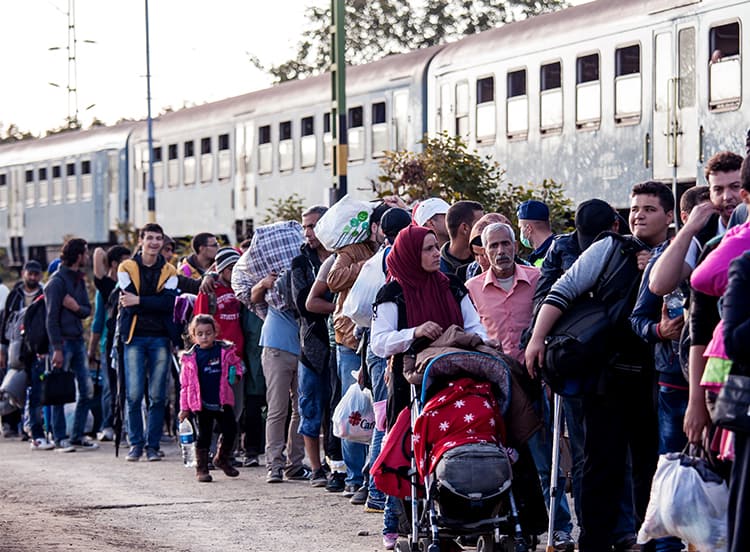 A strange realization hit me as I pushed my two children in a stroller through the streets of my city this week: Some of the many people sitting on the curb were likely viewing us with suspicion or even hostility.

It was not my first Fourth of July parade marching on behalf of World Relief, the Christian ministry where I’ve worked for more than a decade and one of nine organizations nationally that partners with the U.S. State Department to resettle refugees. Never previously would our message—a sign proclaiming “We Welcome Refugees,” the “Welcome to America” banner that church-based volunteers often bring with them to the airport to pick up newly arriving refugees—have struck me as anything other than one more element of the patriotic milieu as we celebrate our nation, including its history as a beacon of refuge for those fleeing persecution.

This year, pushing my kids in a stroller alongside World Relief colleagues, volunteers and a newly naturalized former refugee from the Democratic Republic of Congo proudly draped in American flag decorations, the thought occurred to me that I might be putting my own kids at risk by having them carry the “We Welcome Refugees” sign. Many Americans today feel very strongly that our nation should not be welcoming refugees.

With the president’s refugee-related executive order now allowed by the Supreme Court to go (with some exceptions) into effect, many refugees and their friends are once again feeling the whiplash of the U.S. refugee resettlement program, long a point of pride among most Americans and broadly supported by politicians from the left to the right, become heatedly controversial. Americans today are sharply divided on the question of refugees.

I personally feel the dissonance of that divide within American evangelicalism on a daily basis. In my work with churches throughout the country, I interact regularly with Christians whose faith has driven them to befriend resilient refugees who fled terror and persecution to replant themselves in communities throughout the United States.

As refugee policy questions have become headline issues, evangelical Christians—most of whom tend to be politically conservative—have advocated fiercely for refugees, and not just in deep-blue large cities but in red-leaning suburbs like Wheaton, Illinois, and small cities like Spokane, Washington. Hundreds of pastors—including some of the most prominent evangelical leaders in the country—signed onto a letter to President Trump voicing support for refugee resettlement that ran as an ad in the Washington Post, and some of them visited Washington, D.C. recently to personally advocate with their elected officials.

According to polls, though, these evangelicals are the minority: The significant majority of white evangelicals, at least, support the refugee resettlement moratorium that is part of the executive order. I see this side of evangelicalism in my work, too: While World Relief actually has experienced a significant uptick in the number of local churches wanting to help refugees in the past year, we’ve also seen an increase in requests from pastors for guidance in responding to disgruntled members of their congregations who do not want their churches serving or advocating for refugees. I’ve observed four primary barriers to evangelicals engaging refugees more robustly.

First, there’s been a deficit of discipleship on the topic of refugees and related immigration issues. A 2015 LifeWay Research poll found that just 12 percent of American evangelicals say that their views on immigration-related issues are primarily influenced by the Bible. Only about one in five say they have ever been challenged by their pastor to reach out to refugees or other immigrants arriving in their communities.

That’s not because the Bible does not speak to the theme (Old Testament scholar Walter Kaiser counts 36 references to God’s concern for the foreigner alongside the orphan and the widow, and Jesus Himself began His earthly life seeking refuge in Egypt) nor because most pastors are unaware of biblical teachings (86 percent of Protestant pastors acknowledge that Christians have an obligation to “care sacrificially for refugees and foreigners”). Frankly, though, it’s a scary topic to preach on, likely to generate pushback from some in the pews.

That pushback from congregants is largely driven by security concerns, which are a second barrier to evangelical engagement with refugees. These fears are fueled by particular media outlets and politicians that have successfully created an association between refugees and terrorism in the minds of many Americans—despite the fact that, since the Refugee Act was signed into law in 1980, no individual admitted as a refugee to the U.S. has ever taken the life of an American citizen in a terrorist attack.

Beyond a dramatic overestimation of the actual threat involved in welcoming refugees, though, some American evangelicals have idolized security. While we bid farewell with expressions like “be safe” and “take care,” in Scripture we’re told repeatedly to “be not afraid” and “take courage.” Jesus’ words, while quite clear, are hardly fodder for a feel-good suburban evangelical sermon, especially in an age of terrorism: “Do not be afraid of those who kill the body and after that can do no more” (Luke 12:4). For a Christian, we can love fearlessly—not because the U.S. government has an extremely thorough refugee vetting process with a remarkably strong safety record (though it does), but because God promises to be present with us and he “is our refuge and strength” (Psalm 46:1).

Closely related to security concerns is a third barrier: a particular fear of Muslims. Perhaps influenced by media that gives far more coverage to terrorist attacks perpetrated by Muslims than those perpetrated by non-Muslims, and (for the average Christian) not influenced by even a single personal relationship with a Muslim that might serve to help rebut stereotypes, many American Christians fear welcoming Muslims will increase the risk of terrorism. Others fear that Muslims will bring with them the imposition of Sharia, overtaking the U.S. Constitution and the values it protects.

It’s common, but inaccurate, to presume that most refugees coming to the U.S. are Muslims; in fact, over the past decade, there have been more Christians resettled as refugees than those of any other faith. But it’s likewise a misconception that most Muslims are sympathetic to terrorist groups like ISIS; the vast majority of Muslims worldwide oppose such groups, which Muslim scholars condemn as heretics.

While many Muslims seek to live by the principles of Sharia as a matter of personal piety—not so unlike how most Christians would (hopefully) say that biblical commands should guide their lives—most Muslims in the U.S. do not believe that Sharia should be used as a legal source, just as most Christians affirm the biblical teaching that adultery, lying or coveting are sinful but few advocate for them to be made illegal.

In any case, the U.S. Constitution already explicitly forbids establishing a religious law—whether Muslim, Christian or otherwise—from being established as the law of the land in the United States. (It’s also worth noting that many Muslims in the U.S. are fairly nominal in their faith; while Americans fret about Sharia, plenty of Muslims could not define the term, just as plenty of self-reporting Christians would probably struggle to tell you what the Beatitudes are).

As a Christian who believes that “salvation is found in no one else” but Jesus (Acts 4:12), I want for Muslims to have the opportunity to experience the transformational hope I have found in Christ. As teams from local churches partnering with World Relief welcome refugee families from non-Christian backgrounds, they often are asked why they extend such kindness and welcome, and they have the opportunity to “give an answer … for the hope that you have” (1 Peter 3:15); many refugees in turn have made the decision to follow Jesus. When our response to Muslims is fear instead of love, we miss a divinely orchestrated opportunity to share the love of Christ.

A final barrier that keeps many evangelicals from welcoming refugees, and one that the 4th of July holiday can exacerbate if we treat our nation’s Independence Day as a true “holy day,” is that many have bought into the idea that their American identity is synonymous with or equally as important as their Christian faith. Many American Christians thus insist that we should merely “look out for our own.” It’s become something of a talking point among critics of refugee resettlement (albeit rarely, in my experience, from those deeply involved in serving veterans) that we should be caring for homeless veterans, not the poor and persecuted of the rest of the globe.

From an economic perspective, though, welcoming refugees is more than just humanitarianism: It’s also in our country’s national interest. A recent study by economists at the University of Notre Dame found that, over the course of 20 years, the average refugee pays in about $20,000 more in taxes than the cost of their resettlement and of social services for which they qualify.

Beyond the net positive fiscal contribution, refugees (like other immigrants) also stimulate local economies by their consumption, and they’re uniquely entrepreneurial, starting small businesses at rates higher than native-born U.S. citizens. A few of those refugee-fueled small businesses have gone big, such as Sergey Brin’s Google or Andy Groves’ Intel, each of which employs tens of thousands of Americans.

From a Christian perspective, the biblical command to love our neighbors is broad: Jesus offers a Samaritan who shows compassion to a traveler of a different ethnicity and religion as the model of neighborly love, emphasizing that the neighbor whom God commands us to love cannot be narrowly defined to include only those who share our citizenship.

Jesus insisted that God’s concern was greater than just for one’s own nation—and it got Him into trouble. According to Luke’s Gospel, the crowds in Jesus’ hometown of Nazareth were amazed by His preaching, but if you read just a few verses later, they had kicked Him out of the synagogue and were trying to throw Him off a cliff (Luke 4:22-29).

What had He said that so upset the people of Nazareth? He dared to suggest that God’s love was bigger than just for them and their kind: that God had sent the prophet Elijah not to an Israelite widow but to a foreigner, and that God could have had Elisha heal the sick of Israel, but He instead sent him to heal a Syrian. “Nazareth First” might have won Jesus a local election, but it would not have been faithful to the universality of God’s love, which He makes clear we are to emulate.

Despite these significant barriers to American evangelicals fully embracing refugees—biblical illiteracy, an unhealthy obsession with security, fear of Muslims and a parochial view of our call to love—the church-based volunteers who marched alongside me on the 4th of July give me hope.

When American evangelicals actually meet refugees, they rebut many of their stereotypes and misconceptions and remind them of the biblical truth that each of them, like each of us, are people made in the image of God with inherent dignity and potential.