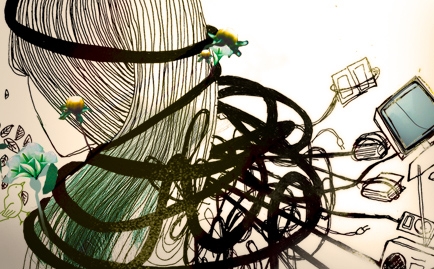 How
much does media influence our lives? Whose thoughts dominate our
actions? What of the basic principles of input and output? Do the
things we see and hear really affect out actions? Is it possible to
focus on God in the midst of our daily duties and responsibilities? The
answers to all of these questions and more are what I set out to find,
and so I began a seven-day experiment in which I became disconnected.

Normally
I start my morning with Cap’n Crunch and The Weather Channel, followed
by a glass of OJ and a short round of remote-control roulette in which
I take a spin through the major networks in search of news. More war,
more storms, more deaths, more insurance commercials, more Hollywood
breakups, more of the same. I listen to the radio on the way to
work—DJs, traffic reports, more insurance commercials. Throughout the
day, I utilize the Internet—email, Facebook, iTunes and, of course,
Google searches galore. I come home to Everybody Loves Raymond reruns, a few phone calls and nightly news. Then I say my prayers, crawl under the covers and say goodbye to another day.

Sound
familiar? Maybe not. It hasn’t always been this way for me, either. I’m
not quite sure when I started living like this, so habitual, so
frivolous with my time and my mind. It came on so gradually that I
never noticed—that is, until one night, when it hit me: I was a
screen-staring zombie who spent the majority of her waking hours
connected to some kind of media outlet. I couldn’t remember what or who
or why I was watching. I couldn’t recollect the last time I had come up
with an original thought. I couldn’t recall the last time I had heard,
really heard, from God.

It’s
not that I think media in its many forms is necessarily bad, but rather
that I began to realize my current use and abuse of it was in desperate
need of a change. I wanted so badly to slip into the God-centered
mentality that comes from helping others on a missions trip, into the
peace that comes from weekend mountain retreats or visits to the
seashore. When freed from everyday distractions, it seems so much
easier to seek and serve God. I wondered if that kind of fire for Him
could be ignited in even the most mundane circumstances, and if so,
what it would take to keep that fire burning on a daily basis.

I
decided it was time to stop asking questions and start taking  action.
I turned off the TV, put away my iPod and, gasp, unplugged  the
Internet (although I used email for work purposes only). I shelved the
books I was reading, pledged to use my cell phone only where a landline
was available and vowed to read only the Bible for the next week. So
there I was, completely free of distractions and ready to hear from
God—or so I thought.

On
the first day, I felt the cruel sting of habit in almost every
activity. I ate my cereal in front of a blank TV screen, and during my
morning commute, I tried to turn up the volume on the radio at least
five times even though the power was off. The silence was so odd at
first, almost unnatural. I missed music and commentaries and news
updates, people telling me about the world outside. I struggled,
especially at work, without the Internet. Boy, had I become reliant on
the reaches of the World Wide Web. And now no personal email or IMs. It
felt like someone had cut off my oxygen supply.

The
next day went along in much the same way, and I spent most of it
floundering and frustrated. I wanted to get the restless commotion
inside my head to stop. I wanted to hear God’s voice,  to just be still.

But
I couldn’t do it. The silence was too much. I felt like I was
suffocating again. I laced up my tennis shoes, headed out the front
door and started running as fast as I could go. My first realization
was, in fact, that I was out of shape and needed to start seriously
working out. My second was that there’s a lot to look at in this world
besides  a TV screen.

I
noticed the flight of a tiny bird and how his diligent flapping led
seamlessly into graceful soaring. I heard children laughing as they ran
through freshly cut grass, playing freeze tag. I felt the kiss of a
cool breeze against my forehead. Marching ants, chiming church bells,
swiftly moving clouds against a swirled pink and purple sky—not too
shabby for an  evening’s entertainment.

I went to bed that night feeling more alive than I had in a long time. Perhaps disconnecting wasn’t so bad after all

But
by Saturday, seeds of doubt were budding into discouragement. What was
I thinking? Did I really think that a few days of no TV and a fast from
music, movies and magazines were going to change my life?

Like
an invisible boa constrictor, the pressures of bills and duties  and
relationships and images and survival and even this experiment and the
cords I had tried so hard to disconnect from had wrapped and coiled
their way into a chokehold. I couldn’t breathe. I needed air. I needed
God.

Don’t Confuse Your Diet for a Fast

I
fell to the ground and finally broke down. It had been so long since I
just gave in to God, since I simply collapsed at His feet and admitted
that I couldn’t live my life without Him. I cried and prayed and
pleaded for Him. Out of the mingled sobs and silence, His voice softly
spoke: “I am the way, the truth and the life.”

I
thought of how God formed Adam from dust and breathed into his nostrils
the breath of life (Genesis 2:7). I thought of how Jesus urges us in
John 15 to linger in His love. “I am the true vine . . . remain in me
and I in you.” I thought of how He wants us to be one with Him in
complete unity (John 17:20-23). I thought about how my actions and
distractions had created a chasm between God and myself, and how that
divide had been filled with a love so undeniable that I couldn’t help
but sing out in joy. I thought of how after His resurrection, Jesus
breathed on the disciples to help ready them in their mission to spread
the Good News.

I
contemplated all of this in the last day of my fast. The experience was
hard, to say the least. It was humbling and challenging and at times
lonely, but it was also remarkably mind-boggling. I’ve concluded that
whatever we saturate ourselves in—whether it be television or movies or
music or the Holy Spirit—does indeed affect our actions. It’s basic
input/output: What we put into our daily routines dictates what we get
out of life. I found that disconnecting from distractions can help us
become who we were created to be, but more importantly, the simple act
of plugging into the Word of God can lead us back into the presence and
power of our Creator, which is exactly where He wants us to be.

Las Vegas Underground a Refuge for the Homeless