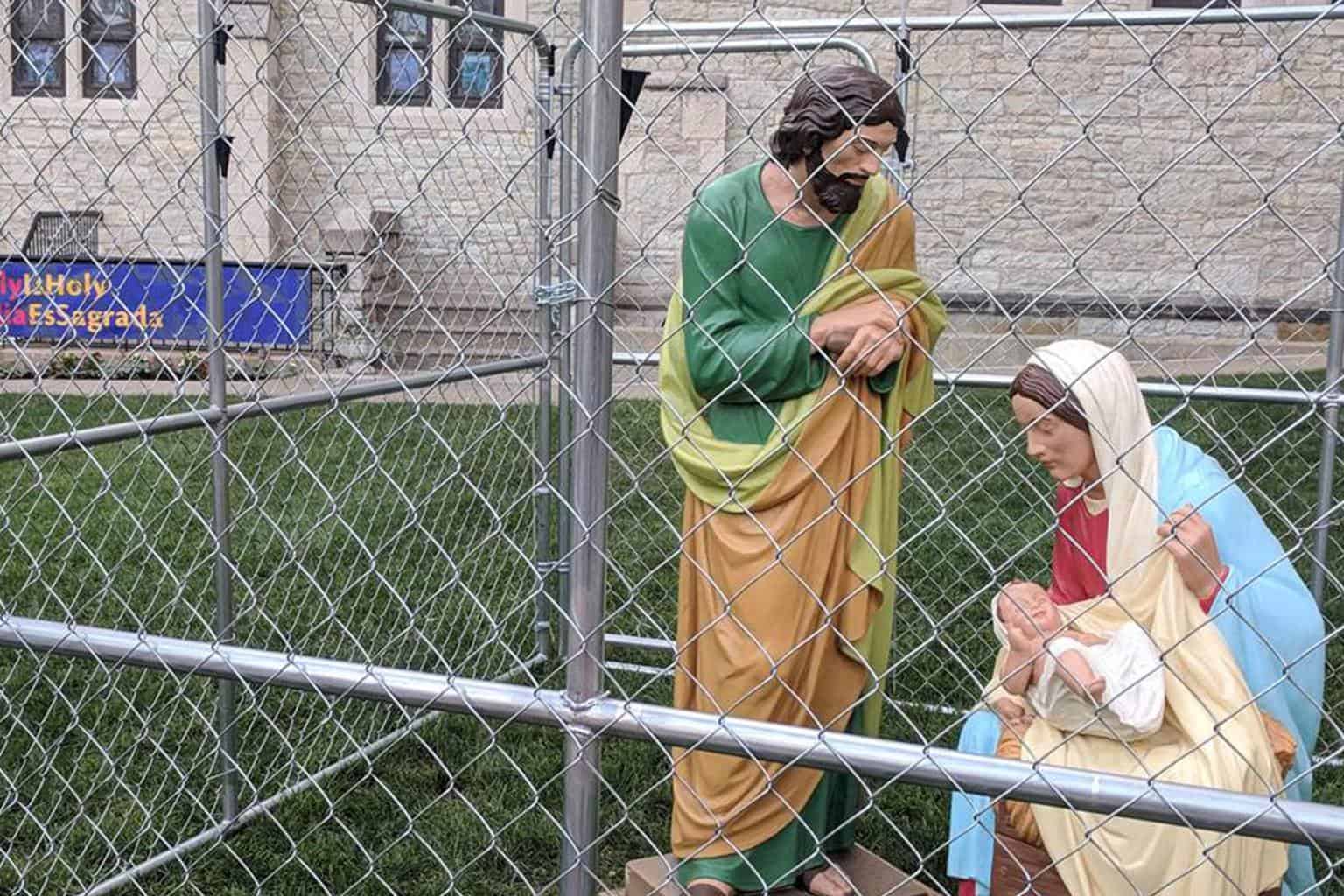 “Who do you think you are, putting Jesus in a cage topped with barbed wire?” a passerby demanded of my colleague who’d been watering the lawn in front of our downtown Indianapolis church a few days ago. The angry pedestrian was responding to the icon we had built of the Holy Family in ICE Detention, using the trio from our Christmas Nativity scene.

Turns out: Encountering a familiar image in a new context can turn everything you thought you knew upside down. Such disruption isn’t always welcome.

The icon is an act of symbolic resistance to the inhumane zero-tolerance policy which is detaining families indefinitely at the U.S.-Mexico border and has resulted in the separation of 3,000 children from their families. This symbol is rooted in Scripture and in our Episcopal tradition, and the decision to install it was made prayerfully by our leadership in the context of treasured relationships with immigrants who are members of our staff, parishioners and members of the Indianapolis community. It was our way of saying, as my colleague the Rev. Lee Curtis told the Indy Star, “This family is every family, and every family is holy.”

The response has been humbling: Around half a million people around the world have viewed it. Many have seen it as a holy representation of God’s family and a powerful expression of solidarity with those who suffer. Others have been scandalized. The dissonance between the familiar Nativity scene with which our culture is familiar—serene, pastoral—and the hostile, austere environment of a barbed-wire topped cage provoked a good deal of anger.

The icon struck a chord with so many because it disrupts a cherished tableau ingrained in American nostalgia. It offers a less-than-rosy image that is closer to the gritty, unsafe situation the Holy Family actually would have faced in the Near East some 2,000 years ago. The circumstances of Jesus’ birth were far from serene: The Holy Family was homeless and poor at Jesus’ birth. They were set on the run as refugees when threatened by religiously sanctioned state violence. The icon simply locates the Holy Family in a parallel universe of our own nation’s making. So, the Holy Family in ICE Detention is a stumbling block to those who would prefer to follow a sanitized, safe, white-washed American Jesus. And when human beings lose equilibrium, anger is a common response.

Not long ago I would not have had much patience for angry respondents (perhaps 60 percent of the hundreds of phone calls, emails and social media messages we have received come from people who want us to know they are not happy with what we have done). But after two months of living and working in the Midwest—a context I once wrote off as the American Nazareth—I am more empathetic to how unsettling it is to have your biases surfaced. The deeper I enter into relationship with the Indianapolis community, the more my blind spots are revealed. I did not know how verdant and beautiful it was here, nor how kind folks are, nor did I realize the strength of the artist and activist communities. My stereotypes are coming undone, revealing my own ignorance along the way.

Our mission at Christ Cathedral Church is to “Widen the circle of God’s love with heart and voice,” which means we seek to participate in the love of God that breaks down biases and barriers, especially those which exist within ourselves. This mission expresses our desire to become the sort of community that actually reflects the beautiful breadth of God’s exceedingly diverse family. Such a mission compels us to stand with our immigrant members and with all who uproot their lives to seek a future free of violence and fear. Expanding the circle also means we open ourselves to engaging with those who disagree with our deeply held convictions expressed in the icon, namely that:

Christ is in the cages with those detained and separated from loved ones. The Mother of God holds every lonely, traumatized child. If we claim to love Christ and to be members of God’s family, it’s up to us to act accordingly.

O Come Let Us Adore Him

I have been reminded in the last week that it isn’t necessary to move to a new city in order to disrupt our stereotypes. We don’t need to move to a new state to recalibrate our imaginations. We don’t have to migrate to another country to have compassion for those who suffer oppression as immigrants and refugees.

Sometimes we simply need to encounter an image that challenges the one we have held as precious.

It is my hope that those who are thrown off balance by the icon will take the time to contemplate their reaction. I hope it will lead some to ask questions like: “What do I believe about God, that would make seeing Jesus in a cage so offensive?” I hope the shock of seeing the Holy Family incarcerated might propel some toward deeper encounters with God. I hope such an encounter with God might lead to a greater capacity to see Christ in all of God’s children.

Images like the crucifix and the Holy Family in ICE Detention are invitations. They beckon us to meet God in those places where our knowledge ends and our personal experiences cannot take us. They bid our imaginations enter a new space, where we have the opportunity to contemplate, “Where is God here?”

Lauren Grubaugh serves as Curate at Christ Church Cathedral, Indianapolis, and as a Dialogue Facilitator with the Kaleidoscope Institute. She is devoted to building fiercely tender, justice-oriented movements with intercultural, multilingual communities. She also loves to teach people how to salsa dance. Lauren is an alum of Fuller Theological Seminary (MDiv., '16) and Virginia Theological Seminary (Anglican Studies, ‘18).